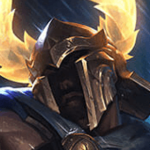 Curse of the Sad Mummy (R)

By unk87
Explanation
I've decided to publish this build because I often see people trading or rerolling off Amumu while I consider him being S-tier and very fun to play.

Amumu does very well on ARAM because enemies are naturally clumped up together so it's easy to pull off amazing ultimates.
Also Amumu has pretty good target accessibility with Mark/Dash and Bandage Toss so it's hard to dodge or peel him off.

Gameplay
Amumu is usually building AP because in ARAM most people don't build defense and are very vulnerable to a combo. The tankier the enemies are, the tankier Amumu should be because he will rely more on his basic skills rather than his ultimate.

The core of the build is CDR reduction to ultimate through runes. Amumu will keep looking for clumped up and vulnerable enemies and try to do as much burst as possible.
Combo in and leave, repeat. Avoid sticking to a target because Amumu will just get focused down. Retreat and Bandage Toss in again if needed.

Wombo.
At least once of twice in a game the enemies will clump up (usually early before they get wiser). Enjoy.
Best combo is to Mark/Dash -> Flash into clump -> Ultimate -> E -> Bandage Toss (reposition or finish off).
Bandage Toss may be used before, the ultimate is the most critical to land at least on 3 enemies.

Items
Amumu should itemize AP early because his skills are quite strong and items such as Zhonyas have a lot of utility.

Full AP should be avoided unless the enemy team is easy to kill. Once late-game Amumu can do quite a lot of disruption with repeated Bandage Toss provided he's able to stay alive.