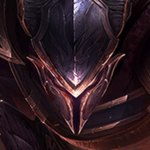 if this man has over 400 stacks ur screwed

If he is fed

By Jmatt
How to play Pantheon
If possible try to play as aggressively as you can against squishy champs. If playing as support wait until your W is full maxed until going in. Your combo should usually be, full stacked W, engage (let the auto attacks go until full stacked again) then Q. If you that the champ you are engaging on has cc or can attack right after, Use E right after or E after your W. Try to target mainly low health champs and fully engage with the team on tankier ones. When laning against scaling champs try to bully them as early as possible. Your lvl 2-3 is stronger compared to most champions but you will have to either kite them out or play smart if they know how to play their champ or against pantheon. When it comes to playing jungle as pan, when on blue side start red buff then level up your e instead and starts raptors and full clear top jungle, when on red side full clear bot jungle and do raptors into red buff. When ganking try to gank the squishy champs or lanes that are pushed in on your side. Signal your gank and full engage. If you need to flash then flash for the first blood or kill. Regardless of your role, be it being a lane or support, pantheon is mainly useful if he has kills. If you do not have any kills or items as pantheon you are basically useless, so play smart and dont mind if you ks, cuz a fed pantheon is a scary pantheon.