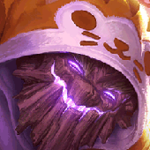 Ionian Boots of Lucidity
VS Ad

By VisoredTrill
Kit
Warwick excels in the early game with great sustain from his Q (also followers any dash, teleport or flash when held down), move speed and attack speed from his W (active and passive) and his E which provides damage reduction until recasted to fear multiple targets within range. His kit early game allows him to invade with a more forgiving risk, great duel potential and decent gap close for ganks and engage. The early game will dictate whether you carry or not. Use your early game pressure to gain map control and obtain enough gold for your first back.
Clear/Playstyle (Early to late game Strats)
So the first thing to consider is starting items. As I said Warwick has great sustain with his Q resulting in a relatively healthy clear so potions are not needed . Instead purchese your smite, a pink ward and yellow trinket. Start by placing your pink in the bush next to the middle river bush on your blue side. this will allow you to know if you are being invaded as well as give your mid lane vision to avoid ganks. Next place your yellow trinket at the enemies buff that you think they are starting most likely Bot side for the best leash possible or on the buff you are pathing towards if you chose not to invade. once you have intel you can start with an invade on the enemies buff that they will most likely take 2nd. It's risky but can put bad first clear junglers behind. If you feel it’s worth the risk. Or start with your bot for the best leash to speed up your first clear. Either (Red-Wolves-Blue-Gromp and gank into Scuttle or start on your top side into a reverse 4 camp.). As I said Warwick has good sustain so clears are healthy. Though I'd recommend waiting to clear Raps and Krugs until your second clear or once you have obtained your first item due to his lack of aoe abilities it will really slow your first clear. Ideally you will want 1100 to 1200 for Bami's Cinder Or Tiamat. The sooner you get one if not both of those items the better your clear will be

Into the mid and late game keep your map pressure and get as many objectives as you can. Pick off low health targets and utilize Warwick's ability to gap close and hunt them down With your W Passive and ult. Once Objective and team fights break out, act as frontline or engage(depending on your build) for your team but make sure to peel for your backline if the enemy collapses on them. Remember its quite easy for you to chase people that are low so use his kit to track them for an easy clean up. If things go south use your E Fear to peel them off and don't hesitate to Ult away. Additionally don't worry about missing your ult it's good to hold onto but if you need to get to a target use it as you deem necessary

Builds
Feel free to build him how you want these are just Two builds that I've had successes with and enjoy the most in my games. both have a load of on hit and hybrid dmg so its hard to build against. Hyper Stride is very fun when ahead Because of the movement that is attached. This allows you to be in almost every place at once and makes your map presence that much bigger. that little dash from stride breaker can also help you stick to targets and can be life or death if you are being kited out. Siphon Hide is my favorite build for dueling due to thae emence healing that it comes with and its beefiness.Both of these builds I use and enjoy frequently. if you have at tough matchup or are behind Siphon is the better choice. it is beefy and has a lot of healing to sustain in bad situations or fights. Hyper Stride is most effective when ahead and is hard to pull off for me when behind, its better used to further your lead with map presence and time efficiency. I'm not a pro WW player and I'm not a League vet. I'm just an avid WW player that likes to make builds. These are just my opinions so please feel free to give me feedback.