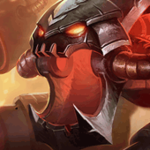 Fury of the Sands (R)

This dude is tough and your speed generally don't mean anything to him bc of his mobility and CC. With other builds he's not too bad, but with this one he sucks.

By Loki421
Laning
Build is really good into ranged enemies bc you can out range and poke them down and most have very little sustain. Also really good into imobile champs like Darius or even Illoi (if you dodge her abilities).

Generally you want to treat the early game like you are Teemo. Poke from range with E when mana flow is up and poke the enemy down without taking any damage in return. When they are low go in and finish them off. Try to farm while you poke. Q where you can but don't worry too much if your stacks aren't huge. This build actually doesn't even require huge stacks. I've crushed many games with very low stacks simply from snowballing levels/gold.

Generally use your speed to your advantage. Go in for a quick trade then run off with Phase Rush. You'll be suprised how many times you can bait an ignite or an ult or other big CD and just walk away. Then comeback to finish them when they have fewer resources.

In team fights, you are not a tank, you are a fighter 100%. Do not just face tank the entire team like you might do on a normal Nasus build. Instead stay back and weave in and out of combat. This build is exceptional at running people down or running away, especially once you have Deadman's.

Macro
Outside of early game, this build is really all about macro and controlling the map. Play the mid game like an Udyr, go for gates while running away from collapses.

Generally you just want to keep pushing it down top lane, then bot and gaining a massive level and gold advantage. Try to stack Q as much as possible if you are given the space/time to do so. But be ready to push hard with E if the opportunity presents itself. You can clear waves extremely quickly with one E. You can 1v1 pretty much anyone in the game with your Ult+ignite if youre ahead. Make sure to ward, but this build is really good at escaping a collapse which is part of what makes it strong.

Attempt the cycle of push>rotate mid>collapse on an out of position enemy. If enemies come to you in numbers, just run far enough back to be safe. But then start pushign again as soon as it is safe to do so. Keep the enemy having to either deal with you or let you keep getting further and further ahead.

Having only half the stacks you normally would kind of doesn't matter when you are 4 levels and 2 items up on your oponents.

DONT TAKE INHIB too early! Before 20 mins is alwways dangerous as you can feed the enemy XP and gold to catch up. And with the snowball nature of this build you can def wind up taking very early inhibs that the rest of your team isnt ready to capitalize on, esp if the rest of the map is going even or losing. I often will push to top inhib and leave it, then go bot and try to repeat.