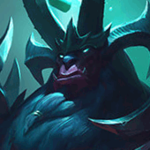 this guy is just too slippery, even if you make a good flash play your adc probably will be picking his nose, so not worth it.

Draven is good at just standing still and autoing, so if your adc isnt bursty you are going to have a hard time finishing kills

high damage, can catch up to your insane play making ability up the lane.

Jhin can follow up with more CC, and you can lock people down after they are slowed by his ulti.

You do all the work anyway, just let this one sit back and right click away.

high damage, can catch up to your insane play making ability up the lane.

Jhin can follow up with more CC, and you can lock people down after they are slowed by his ulti.

You do all the work anyway, just let this one sit back and right click away.

By Calabeast
The Early Game
Early game you should poke with Q but play relatively safe because you will find yourself taking a ton of damage if you try for an early taunt/knock up and fail.

Farm your Relic shield, but keep in mind you need to freeze, or push the wave when its good for you Adc, so don't just attack the wave when you have a stack of relic up. This will piss your lane partner off to no end and hurt your chances for a win ultimately.

Buy Mobi boots early as it will catch your opponent off guard and allow you to run right in and smash the enemy adc on the mouth. After these build towards Knights Vow as it will give you the sustain you need in longer drawn out fights.

The Mid Game
Mid Game, as long as you didn't feed, you should be a roaming monster. With Mobis and Knights Vow, along with Locket you can run up to any allied lane and completely dumpster their lane opponent.

Try and track the enemy flashes as this is a even more secure way of roaming and ganking to help the rest of the squad. Flash is usually the only way someone can escape the Colossus.

Once you have built your Redemption start looking for opportunities to dive hard and take as many towers as possible with your Demolish rune.

The End Game
With Overgrowth you should now be quite the obnoxious tank, and with your arsenal of active items the enemy won't understand why they are losing fights. Once they do realize what your building, its far too late and its time for one good ultimate to rule them all and secure your victory.

Keep in mind you are playing support, don't play for KDA, be smart and if sacrificing yourself is going to put your team in a better position to get an objective or continue the fight, then do it. BE A HERO, granted you will most likely still get flamed with ? pings because you died, but we all know where your head is at.

PEEL for your win condition! If its the adc hang back and make sure the enemy assassin gets **** blocked before you dive into a team fight. If its your jungler or mid laner, the same mentality, follow them and make sure they stay alive long enough to make their impact on the fight.

Good luck, and go smash some nerds.
The Stream
I am currently streaming on Twitch, come check me out and watch me rage and complain that other people are ruining my games, when it's definitely my fault.

Thanks for checking out my guide, I hope you learned something, and even if you didn't hope you had a laugh.