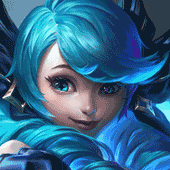 With her wall and stun she can bully jhin out of lane. With jhin's low early mobility without gale its pretty hard to dodge it especially at lvl 6

As long as you can dodge his empowered q its a super easy and free lane.

If she get's any of her stuns off its almost always a free kill.

If she get's any of her stuns off its almost always a free kill.

By Urishiro
Tank/Bruiser Jhin has been a super fun build i've been working on to escape the pain of playing adc and getting 1shot by the entire enemy team. This also works bot with a support that has alot of cc.

You mostly want to proc grasp as many times as possible and farm up till deadman's plate but after that its a fun time running around the enemy laner dodging everything while still dealing 400 damage per shot :>. The build doesnt really start getting on its feet till you get your titanic hydra gets built "thats where grasp comes in". depending on how many grasp stacks you get it can vary the damage but at this point expect to be around 300-400 ad with 2.8k-3k health with 3 items!