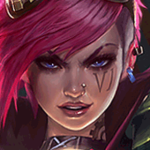 By tristanbob
The goal for this build is to frequently use Malphite's ultimate to nuke squishy enemies. The items will give you significant burst magic damage, while also providing moderate tankiness. The Ultimate Hunter rune reduces the cooldown on your ultimate.

Try not to use your ultimate on tanky enemies. It won't do enough damage and it may end up with you dead. A lot of tanky characters may appear to have low health, but their runes/items/abilities often give them a significant boost while they are low health. In short, if there are multiple enemies, always ultimate the one with the lowest magic resist. You should try to hit multiple enemies with your ult, but only if you are sure to hit the target squishy.

Gank a lane whenever your ultimate is ready. Try to gank lanes that are over-extended (pushing towards your tower). Of course, if a squishy enemy is hiding under their own tower with low health, you will be able to survive a few tower hits to finish them off.

In team fights, you should try to bait the enemy team into fighting under your tower. If they are fighting under their tower, I recommend ignoring them tell your team that you are going for a jungle farm or objective.

NOTE: You will not likely be able to 1v1 the enemy jungler, unless they are low health. If needed, you can often escape with a single Q, but you can also use R, or lastly Flash.

A Tanky Guide to Support Malphite
By TDKPBT