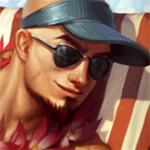 also Runaan's Hurricane work with frozen mallet wish will give him more crowed control than he naturally has.

Thats why this build is over powered on him.