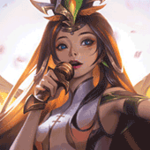 By talialt31
The Essence Reaver
I've talked a lot about items, her synergy with them, and runes that make Nilah more powerful, but I haven't really backed up my statements so here are some images that will make the numbers make more sense.

This is with lethality items except Lord Dominik's onto a target dummy with 110 Armor. The auto was so quick after the Q that you'd probably miss it if you weren't catching it with recordings already. The whip did a massive 900, but the Essence Reaver sheen made the next auto do over a thousand. On glass cannons like ADCs, 1900 damage is more than enough to force a back or a retreat.

Mana consumption on an ADC is usually not going to be problem, but we don't want to waste a rune for Presence of Mind when we could just get it back with an Essence Reaver. Plus, that boosted auto is going to hurt when it hits low defense targets. This screenshot uses the meta-like build I discussed earlier. Notice, you can gain up to 64 mana, which is 24 more than a Q costs. In fact, the only thing that costs more than 64 mana is your ultimate.

This ratio is actually absurd on an ADC, especially with the in-built armor penetration, the healing, all of it. Getting Nilah to 100% crit is crucial to having this ridiculous number. Thus, regardless of whether you go meta-like or lethality, always remember to have as much critical rate as possible, even if you must reduce the lethality items.

Also, though, if you don't have 100% crit, you won't have 33% pen so lethality calcs will need to change a bit. For example, if you don't use Bloodthirster or Essence Reaver and instead a Youmuu's, you can nullify up to 148 Armor with no problems, but you won't get more mana or Life Steal. That's why the full crit lethality build with healing technically still wins with her.
Have Fun!
I'm no pro player, I'm not even that good at the game. However, I am good at finding things that work a little too well on champs and know how to make fun builds that wreak havoc on the Rift or the Abyss.

With that note out of the way, have fun!