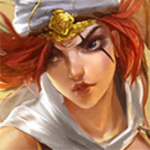 Whether she ults after you wombo, or you ult in to her ult, the giant burst of AOE she provides along with your massive AOE is almost guaranteed to kill *anyone* caught, tanks included.

Large cc ult makes Amumu a very good companion. If he ults in to your wombo, the enemy is toast. If you manages to catch the enemy with a q+ult and they are grouped up, it gives you an easy window to wombo. The only downside is that his ult can sometimes trap them in to less than ideal configurations, as you want them grouped up, and there's a better chance of that happening as they move around.

Ahri's charm has an added effect that when someone on the enemy team is charmed, the rest of their teammates tend to move in to protect the charmed ally. This effectively baits the enemy team in to bunching up, letting you have a juicy ult target.

Diana's ult is another chance to cause a bunch up that you can then take advantage of. She can also ult in to your wombo, but it is better for her to initiate as she consolidates the enemy.

If Ekko catches enemies in his shield dome, it provides a good opportunity to wombo. Additionally, his stun is not an ult, so it provides more opportunities. If you catch the enemy in a wombo, it also sets him up for big followup CC.

Gragas is unfortunately the bane of wombos. When the enemy groups up, it is a tantalizing opportunity for his ult, which if mistimed will actually save the enemy team from your boom boom.

Your wombo affords enough time for Lux to get an ult off that the enemy has no chance to dodge. Also her CC helps set up opportunities for you.

By Marcus Agrippa
Armor is Better than AP
It pains me to see people go full AP on Malphite. Yes, his ult only scales on AP, and you can get nice nukes on squishies with it, but it ends up doing less damage and makes you more vulnerable. Malph's W and E both scale on both AP and Armor, and both slightly favor AP (Thunderclap 20% AP vs 15% Armor and Groundslam's 60% AP vs 40% Armor). However, Thunderclap gives him +90% armor (at max level) with his shield. At level 6, you get 60% additional armor, which coupled with your early Sunfire means you'll have around 250 Armor at level 6 compared to a max of 120 to 150 AP at level 6 if you went a pure AP item. So while his abilities scale better with AP, Armor itself scales more with Malph and counteracts the lesser ability scaling.

And then you also get the benefit of having a huge amount of armor.

So Armor beats AP both in damage and in its innate ability to protect you.

Buy items for Sunfire only, you want to rush it which will make sure you get it a little after level 6 (if you die). Feel free to play aggressive early because a few kills is enough to buy Sunfire around mid level 5, making you ready at level 6. If you don't have it at 6, no worries, you'll get it within the next level.
Boom Boom Clap

Once you reach level 6, the game is over for your enemies.

You want to move around constantly, keeping yourself just outside of poke range but close enough for your ult. If you are against a particularly poky team, you will likely have to rely on Flash to engage. Do not be afraid to flash ult, a big catch will mean an objective and that's absolutely worthy of a trade. Even against teams that aren't pokey, your flash is a strong tool to catch them off gourd, as you can cover a ton of ground.

When you see the enemy close to each other, ult (aim for at least 3, but the narrow confines of the bridge make it very likely you can get big 5-man ults regularly). As soon as you connect, Thunderclap W and Groundslam E, then auto. This will kill squishies and seriously maim tanks, cc them, slow their attack, and give your team enough time to come in and clean up. If they aren't quick enough, your autos will do about 150+ aoe damage per hit (at level 6).
The Damage

Wombo + a single attack does 720 damage immediately, then anther 200 on your next auto + sunfire tick. Thats 920 damage at level 6 with the enemy having no opportunity to do anything at all to mitigate it short of dodging your ult which is nearly impossible.

There's more. Dark Harvest will proc, adding 50 damage and harvesting a soul, and you'll get a burst of lethality and mp as you ult from Sudden Impact which amplifies all your damage.
After 6

After you've completed Sunfire and have smashed a few enemies, you'll likely want to work on Iceborn Gauntlet for its AOE on-hit effect that adds yet another line item of damage to your wombo, as well as 20$ CDR which you'll want early, since Malph's level 1 and 2 ults have longer cooldowns. If I'm against a particularly difficult set of ADC enemies, I'll build Thornmail first, but it's fine as a later item.

After IG, I usually pick up Kindlegem (red orb precursor to Warmogs) for the 10$ CDR and then switch to either Abyssal Mask (for 15% more damage when I wombo and the final 10% CDR) if I'm against some annoying magic dealers, or Thornmail if the primary enemies are ADC.

Boots I build earlier if they are pokey, later if I am stomping. It is more important to get CDR early than pen, since you're getting pen from both runes and from Abyssal, sorta. People do not tend to build MR vs this Malph since they see I'm building Armor (and don't make the connection that my abilities, while scaling with Armor, still do magic damage). If they do build MR, get boots and Abyssal earlier.

Finish up your Warmogs to beef up your Sunfire explosion damage.

At this point you're around 4k health, have around 500 armor and 150 MR, do around 2000 damage in a single combo, and completely ruin the day of anyone on the opposing team who isn't a huge tank.