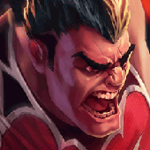 HaleHortler | December 3, 2016 7:27am
It only happens to champions and epic monsters like dragon or baron or herald
0

My guess is that he would have been too powerful in the jungle if he had good clear speeds on top of his awesome mobility. One of his current weaknesses is his awful lane phase, which should be overcome by smartly roaming to bot/top with your E (an interactive solution to a weakness is healthy). If he could jungle with full access to his lane damage on monsters he would be covering one of his intended weaknesses for free.

This was just my educated guess though. You should probably ask a rioter in one of the available forums/subreddits/Q&A pages personally to know for sure.
0

WhatsLeft4Dead2 (6) | December 1, 2016 8:17am
I see, also, is there a Glitch going around that's effecting Guides on this Site? I've been seeing alot of missing Chapters like they've been Hard Wiped. It's happened to some of mine as well.
Loading Comments...
Load More Comments