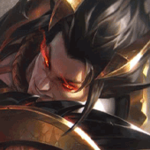 His damage is extreme

A champion that will, if played correctly, burst you out of existence

If he targets you in fights, the team fight will not go well. Pantheon relies on being able to Q repeatedly on the ADC

If you can get a stun, and a couple of Q's in, mordekaiser can save you, and get a free kill with his ultimate

If you can get a stun, and a couple of Q's in, mordekaiser can save you, and get a free kill with his ultimate

36.45 %
More Pantheon Counters
Introduction
Hello, this will be a simple Pantheon buildguide, more than a full out champion guide, to help you in the right direction. Pantheon is a champion that has very good damage, both melee and ranged, and if able to catch someone off guard, you are almost gauranteed a kill. The W + Q combo is deadly.
Items

Pantheon. It will scale all your other items with armor penetration, and will shield you and give you a movement speed upon attacking someone, which is great, because most champions will try to run away from pantheon.

The Collector is the item that will be in your core. You will execute the champion if you take them down to 5%, and you will gain extra gold per champion kill. Which is great, because with pantheon, you should be getting some kills.

Guardian Angel is another good item for Pantheon, and will give you some extra initiative to engage in fights.

Edge of Night is also a great item pick for Pantheon. If chasing an enemy, and you get CC'd, you won't have much luck catching up. With Edge of Night, you can potentially block the CC, and catch up to whoever you are chasing. It also gives you a great amount of damag and health.

Boots There is not always a correct decision for what type of boots you should get, but for pantheon it should either be

Mercury's Treads. Which one you should get depends solely on the enemies. If the enemies have a lot of CC and AP, go for the mercs, or if heavy AD or hypercarry AD who delivers a lot of auto attack damage, go for the plated steelcaps.

Abilities
What makes pantheon extra strong is his passive Mortal Will, where after 5 stacks, your abilities are empowered. The Q short range has a pretty low cooldown, so that is mainly what you will be using to deal damage. Holding the Q to throw, should only be used when a champion is escaping out of range, and you are not in danger from other champions, due to your Q cooldown will be doubled.

Your W is what will help you greatly during ganking. Its a leap and stun on the target champion, which allows you to either get in a couple AA's, or a Q before hes not stunned. It will also give time for your ally to chime in and deal some damage.

Your E has a long cooldown, so you should always use this wisely. When used wisely, it is insanely powerful. It will literally block all damage from where you're facing. From lux ult, karthus ult, veigar ult and more. It will also deal damage, to the enemies who are infront of you, so you should try to go behind the enemy to lure them the other way, so that your top/mid/bot can catch up and finish.

Your R has a long cooldown, but its very good for ganking, especially on an enemy who is pushed top or bot. Your R slows them if they are in the landing zone, they take damage if you land on them. After that, it should be very simple to just finish off with the kill with a W + Q comb
Jgl path
I always start where your ADC starts, because you need help with blue/red when you only have your Q. If enemy mid is pushed after you kill raptors, and you are lvl 3, you should ALWAYS gank, either to force out his flash or get an easy kill.

If you start red > krugs > raptor > wolves > blue > scuttler > Gromp
If you start blue > gromp > wolves > raptors > red > scuttler > krugs
Conclusion
As a conclusion, I would claim that pantheon is a very underrated champion, especially if you are in the bronze/silver/gold ranks. It is an all around champion that can deal a lot of damage, it can CC, block damage, and a global ult where you can help anyone from almost anywhere on the map.