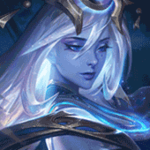 By Typicalwanderlust
Intro
This is my first mobafire guide, so bare with me! This guide will talk about the Algebraically Attempted Warwick build. Enjoy!
What is this build?
Algebraically Attempted Warwick build was meant to replace the usual Divine Sunderer mythic with Trinity Force while not sacrificing too much tankiness. His passive and Q scales with both AP and AD.

A showcase of this build was uploaded by RossBoomsocks on August 5th, 2021. It is available on YouTube. It can be found here: https://www.youtube.com/watch?v=qijWViG8N5o

The Build
Start with a Tear of the Goddess and 2 Health Potions. His ability to bully in lane is not hindered by a loss of a few AD, plus it allows to stay in lane for longer. If you want to heal, use your Q and the tear will stack.

When you go back for the first time, buy Sheen. But if you have leftover gold you can also buy Boots and a Refillable Potion alongside it. After buying those items, buy mythic components, followed by buying Trinity Force itself. It grants AD, AH, AS and health, and attacking a champion grants extra AD as part of its Threefold Strike passive. Buy Berserker's Greaves next, it grants AS and its pretty important when you focus on so much AD. Buy Manamune next, but your tear is nearly or fully maxed out at this point, so upgrading to Muramana is very easy, and it allows lots of AD and mana as well.

Then you should look for Blade of the Ruined King. It grants AS and Life steal so it goes brrrrr with that. The 4th item should be a healing item, choose either Sterak's Gage, Death's Dance or Ravenous Hydra. All of these have AD and some sort of healing.

Runes
The first thing is the Press the Attack keystone. You should go Presence of Mind even though you buy tears cuz of its mana regeneration and its very important. Legend: Alacrity for attack speed goodness. Then Last Stand, in which you can deal damage when you're on low health. Take Resolve as secondary, where you can take Bone Playing for damage reduction, or Second Wind for healing, followed by Revitalize for more healing to make up for the Divine Sunderer mythic. For the shards, take AS/Adaptive Force/Health.
Last words
Take this build on top lane, take Barrier, max Q first, then max E as secondary for dmg reduction or W for attack speed.

I hope you will enjoy this build!