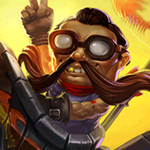 High mobility, can escape your golden card with either W or R, you are also very squishy.

He is easier to counter as you have to only wait for his wind wall, after that stun him. You can also just walk through his WW

Same as yasuo but also on early game he negates your poke, you should play more aggressive towards him

If you surprise him with your golden card then you have kill as he is squishy, but if he blind you before your stun then you lose obviously.

If his passive is up and you miss your golden card then you are pretty much dead because you are really squishy.

If he is a good fiz he can probably counter your golden card therefore use your golden card after he uses his E then go full in as he is squishy. Also with additional MS you can doge his R easily.

By yatsukiko
Introduction and rest
Twisted fate in 9.15 and before somewhere received a nice buff where he can double proc energised AA, for example, if you have statik shiv and use it normally straight after that use your W with any card it will proc shiv again, on early game it's really useful to push. It's also worth note that you can proc W on turrets and with shiv you can deal damage to minions next to turrets. If you have Foot Fleetwork rune you can heal from turrets using W, it will make turret count as champion so full heal.

This build is really good for late game, you have barely any cooldowns on your W and a lot of damage, but you have to remember that your golden card carries you. On early game you have really nice poke as you have both, damage and mana from blue card also attack speed from both E and runes so once your golden card goes just AA enemy.

It's important that in this champ it's not the champ skills you need to have but macro and kait for example, after you stun an enemy you need to know where to position and you also have to predict what would they do after stun, in case of stunning lux you can expect that she will root you therefore when she is stunned I try to "bait" standing in one place then once stun goes off reposition (also because you have additional MS from triforce it's easy), lux in general is easy to counter as you have a lot of MS.

Also as for me, I've never played ap TF and I have 300k points on him.