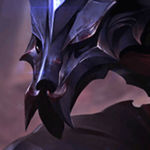 A good darius will be a nightmare. Just sit back and farm until you have bami's cinder and bramble vest. Then you can take short trades with your e and disengage with q. When trading, always wait until he uses his e, then you can disengage at any time by using q directly on yourself and backing off. If he takes ghost, he will still be able to catch up after your Q so you'll have to play even safer.

Garen just shreds you no matter how tanky you build. His ult scales off missing hp which wrecks you. Try not to die early but if you do play safe and you will scale and still be a monster late.

%HP damage on his passive and %HP execute on his ult. Absolute nightmare.

Sett is a skill matchup in lane, but late game he will ult you into your team and do massive damage due to its scaling on target bonus hp. Be careful how you position in relation to your team and Sett in teamfights.

Super easy lane if he goes blue, absolute nightmare if he goes red. He will outheal all your damage and slowly chip you down.

Mostly ad with %hp magic damage forcing you to build armor and MR. You can't fight him unless he's in mega form and once he get's frozen mallet you can't really do anything but farm and scale.

Her % hp damage on her ult destroys you. If you get ulted, walk next to a wall so she can't get the last spot. When finishing her off, W before you ult so she can't riposte.

By SuPIeX
Introduction
Hi guys! My name is SuPIex and I am a casual player who has never had the patience to climb higher that G2. I picked up Cho'gath quite recently and found that he can easily carry low elo games all on his own. Funnily enough, Cho'gath is considered a C tier Champion, which may be true in high level play, but is absolutely false in Gold or below. I win lane almost every game and get a huge gold lead with first tower and several kills which allows me to push my weight around the map to secure drags with ult and get my team ahead. If you're looking for a criminally underrated, absolute unit of a tank champion who can easily carry low elo games then this guide is for you! I do so well in my games that I reached mastery 7 at around 30k champion mastery!
Cho'gath as a champ
Cho'gath has an extremely strong laning phase against almost all melee champs and has enough sustain from his passive to survive well against the dreaded ranged matchups. This, combined with his easy mechanics and extremely strong scaling into late game make him a very safe pick. By late game you can easily have 6k or more HP! Note - I almost always ban vayne because she can single handedly do more damage to you than the entire rest of her team combined even if she is behind.

Anyone I didn't bring up in the matchups is very manageable and wasn't worth mentioning. If you have questions about a matchup leave a question and I'll add them to the list!

How to play
How you play Cho'gath to win changes very little from game to game. For itemization, stick to the following:
- Start Doran's shield + health pot
- vs. AD, rush bamis cinder and bramble vest
- vs. AP, rush spectre's cowl
- Immediately rush Warmog's Armor. By the time it's done you should have over 3000 hp and you will be impossible to remove from lane due to Warmog's Heart.

Keep your lane pushed in (very easy with Cho'gath's full aoe kit and bami's + bramble) and leave lane to counterjungle or secure scuttle crab for extra gold and xp. Your enemy laner will lose cs under tower, more so because it's low elo.

Once you have Warmogs, apply constant pressure top by out-trading your lane opponent each time they try to trade and pushing your wave in. Get demolish procs right in-front of your lane opponent because there's nothing they can do as you'll instantly heal back any damage you take from Warmogs. Starting with 2nd drag always back and go help (TP if u need it, but I always prefer to plan ahead and back in time). You can beat any jungler's smite with your ult and it gives a stack.

In teamfights, you can push into the enemy backline but I find it much easier to play back and defend your own backline. Cho'gath is slow and it is difficult to engage onto the enemy unless you have a Zilean or other support to give you a speed boost. If you play back with your adc, you can let the enemy assassins come to you. Be a nuisance by silencing and knocking up enemies who try to dive your backline. You do a surprising amount of damage for how tanky you are. If you're really ahead feel free to single-handedly zone the enemy team off of objectives by walking toward them. I generally like to secure dragon or baron myself, but if I'm ahead I'll sometimes do this and get an easy kill while giving my team the space they need to finish up the objective.

One thing that you should aim to do over time as a Cho'gath player is become less reliant on the Ult indicator for knowing how much damage your ult can do. Oftentimes in fights, people are taking so much damage that you can ult a squishy assassin before they've entered indicator range and they will take enough damage to die to your ult. This can save crucial split-seconds that can save your carry's life. This is also crucial for dragon control as Cho'gath's ult has a small animation time unlike smite. You will have to gauge the speed at which Dragon/Baron is taking damage and time accordingly. Another thing to note is that you will eventually learn how crazy high Cho'gath's ult damage is. If you're doing well you could easily be able to finish a squishy champion from 70-80% of their max hp.

Note: Cho'gath scales EXTREMELY well! I'm a relatively safe player so I rarely die more than 1-2 times during laning phase, but even in the rare game where I start 0-3 or worse, I scale like crazy and end up carrying mid-late game regardless! Trust in the scaling - as long as you keep getting tankier you will become more and more difficult for the enemy team to deal with. This power spike comes sooner than you'd expect. Once you get enough tank items to cover your bases and make it difficult to kill you 1 v 2 (typically by 20 minutes if not earlier) you will hit your spike. Don't get discouraged if you have a poor lane matchup and know that the tables will turn sooner than you think. There have been many games where I've started out poorly but kept up as best I could with farm and pretty soon was able to 1 v 1 my laner even without any help from my jungler!


How to trade
Cho'gath has huge trading potential that is seriously underrated. Max E, and try to keep your grasp of the undying up before you trade by hitting minions. When the enemy laner comes close, activate E and just auto attack. You're pretty much guaranteed 2 hits because E applies a 50% slow. If they're engaging onto you hard, use E (AA) > W > AA > Q > AA then walk away. If they're a particularly dangerous lane opponent such as Darius, skip the last AA and back off after peeling with Q.
Note for Cho;gath Mid
When going Cho'gath mid, I recommend bringing smite. However, it is VERY IMPORTANT that you don't build a jungle item until 20 minutes, as it will severely hinder you lane gold and xp if you do! Early on, just build your Bami's cinder and leave it at that. Pre-6 use your smite to secure a scuttle crab (coordinate with your jungler so you can each grab one) and counter jungle the enemy raptors. Once you get level 6 you can counter jungle even more effectively with your ult, and you can 100% secure all dragons, especially since you're very close by as opposed to when you're in the top lane. I recommend following the standard build and as soon as it hits 20 minutes turn your Bami's cinder into a Cinderhulk.
Briefly about Items
With Cho'gath, you're leveraging his strong stats and easy mechanics to beat your opponent without much need for skill.

Against most AD matchups, Bami's Cinder + Bramblevest wins you the lane outright. It's an unbelievably strong combo.

Against AP matchups, you won't be gaining the damage from Bami's and Bramble but Spectre's Cowl gives great sustain and your base damage is already quite high. Spectre's Cowl also costs 700 gold less than Bami's + Bramble so you'll be able to get your Warmog's faster.

Once you get Warmog's the lane is over. Your lane opponent will likely have 1000 to 1500 hp and you'll be stomping around with 3000+ and instant out of combat regen. They'll require ganks to kill you and if you play well and bully your enemy laner, you should have them low enough so that when they engage on a gank you can kill them.
Conclusion
Cho'gath is a super easy champion to play and do well with. Have fun stomping low elo games and climbing, and feel free to post any questions!