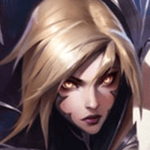 Curse of the Black Mist (E)

You out range her early and you can bully her out. you also match her scaling so if you just maintain your lead then she shouldn't be a problem. I've played this matchup three times so far each time was a breeze

She can bully you out early but you out scale her. also she will leave to roam a lot so I suggest demolish in this matchup.

By P3PPR
Why?
I was literally sitting in the shower and thinking. why are supports so annoying top? and then I realized its because they can farm and just get to their power spikes faster. and then on that brain tangent I realized adcs are the same thing because now they also get solo exp. My brain immediately started going on sperate tangents until I was thinking of a way to optimize Senna. so I was thinking what's a way to maximize souls while also getting as much income as possible. then it hit me, what if I maximize the amount of souls that I get from champs while still farming. but the problem is that in botlane, with all the range and hard engage from most meta supports, this is impossible. and then it hit me again, I had a brain blast to my previous tangent and I realized top Senna.
So how do I want to play this?
In one short word, Poke. you want to be poking as often as possible to get your stacks up. a good way to do this is auto q for an instant stack( note one you get sheen q auto will prock sheen). And to further encourage this go grasp and tear so that now you're stacking 3 things constantly in lane, plus the mix of shield bash with revitalize and overheal makes it so your poke hits a little harder. once you get the ball rolling you just scale from there.
Itemization
once you have the 3 main items then you can decide how you want to play the rest of the game. if you want to optimize damage then rageblade is good from there you can go RFC for range , and collectors for damage the order for those aren't really important just go what you need. also if you notice you don't really need rfc and your team if grouping alot for fights then hurricane is a viable option, also the hurricane bolts prock your q passive so its really good for 5v5s if you need survivability then GA's or blood thirster is a good option. And although I didn't mention it if you want to go tank items you can but I don't personally see it being too useful.
Notes
this is just in theory phase. I plan on personally testing this in the upcoming days and ill post any updates here.

P3PPR Senna Guide
Vote Vote
Metan't Senna
Why?
So how do I want to play this?
Itemization
Notes