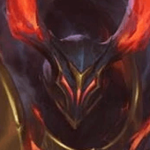 Really annoying to play against. His crowd control shield can block your E and R making it harder to start a fight.

His high CC and ranged auto attacks can really put you in trouble. Not cool to play against.

Easy to kill if u have some advantage in mordekaiser. Harder to kill if u are new to the champion. Mordekaiser is based on q which he can't block.

Just ban him every game.

His high CC and full combo can easly kill u early-game. Try to play safe till first item.

You are winning early-game but every item he is harder to kill.

She is ranged champion that shouldn't belong to top lane. Try to play safe early game.

Damaging abilities or basic attacks grant 1 stack per enemy champion or large monster hit, up to a maximum of 3. After 3 basic attacks or abilities against enemy champions and large monsters, Mordekaiser gains Darkness Rise for 4 seconds, causing him to deal 5-15 0.3) (+1-5% of target's maximum health) magic damage (depending on level) per second to all nearby enemies and gain 3% bonus movement speed (levels 1-18). Damage is capped against monsters at 180 (depending on level).
Further basic attacks and abilities against enemy champions and epic monsters refresh Darkness Rise's duration.

Active: Mordekaiser consumes the stored energy to grant himself a decaying shield for 4 seconds. The shield value is equal to 5-30% of Mordekaiser's maximum health, depending on how much energy he had stored.

Mordekaiser slows a target enemy champion by 75% for 0.5 seconds. If the target is still in range and targetable by the end of the duration, Mordekaiser banishes himself and the target to the Death Realm for 7 seconds. Champions outside of the Death Realm cannot enter or interact with the champions that are within.

Mordekaiser steals 10% of the target's current size, armor, magic resistance, health, attack damage, ability power and attack speed for the duration of the ability. If Mordekaiser kills his target, he consumes their soul, keeping the bonus stats until they respawn.