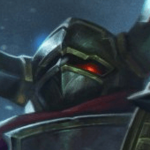 Only take this into a lane you know you will win

Nautilus may not be the biggest threat but he his still a threat.

So much poke and kiting

I am just a low elo player who made a Mordekaiser build 2 years ago. This guide somehow got over 20k views so I thought I might as well update it to be current. When looking up my username the related searches are all asking if more support is still viable.I will continue updating this guide with my findings. Mordekaiser support is not very viable but can be good enough to play in normals. Do not play this in ranked.
An explanation for the build

An explanation for the build

This build was brought from the algebraically attempted Mordekaiser video. While it is very similar, I found that it has potential in the support role. Support Mordekaiser is a little bit tricky to build as he doesnt have much in the form of typical utility. This build provides both a little healing as well as the ability to peel and tank for your adc and later, your team.
Tank Mordekaiser Build

The tank build is actually my favorite build on Mordekaiser. You will do much less damage early but the end result can be much more fun than standard mordekaiser. The frostfire gauntlet doesnt have to be built first item and the build works in almost any order. If you want a more specific guide on tank itemization then look elsewhere. Build according to what is needed when it comes to armor vs MR and if you need armor dont just rush thornmail, thornmail should only be bought in extreme scenarios as there are much more effective armor items into most team comps.
Playstyle

You will feel absolutely awful until level 6, you should focus completely on not dying and play rather passive until that point. Your ultimate is the only thing that allows Morde to work as a support as it completely eliminates the adc from the fight. You want to set up your adc to take a 1v1 with the enemy support which they should be able to win. Once you use your ultimate focus on simply surviving the 1v1 with the enemy adc whether that means engaging or running.
This is a WIP

This is a WIP

I will continue updating this guide when I can and trying to make it more viable on my road to 250k mastery on Mordekaiser. This is again a very experimental build and will be both awkward and difficult to pull off effectively. Overall there are much more viable supports but I am sick of the typical Morde build.

NoisyMicrobe Mordekaiser Guide
Vote Vote
Mordekaiser Support (WIP) Don't Try This at Home
Who am I?
An explanation for the build
Tank Mordekaiser Build
Playstyle
This is a WIP