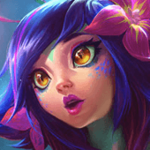 Your CC is your survivability, Olaf ignores all of it post 6.

Very strong duelist pre 6. Post 6 can use E to dodge your ult

Any big AoE initiator who can lead or follow up your ult.

By Princess Violet
Why Neeko Jungle?
Neeko works as a mage jungler similar to Taliyah, Morgana, Zyra, etc. Having played many games with all of them, I can say Neeko is a solid B-C tier jungle. Every part of her kit helps her as a jungler. Note - Just make sure you know how to play kiting junglers! If you don't know how to kite in the jungle Neeko will clear poorly!

Why does Neeko's kit work in the jungle?