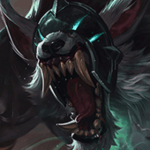 Nocturne Build Guide By InTheShadows94 Updated on May 15, 2022
Follow

By InTheShadows94
Introduction
Hey guys,
if you are here I guess you chose to pick up

Nocturne in order to climb. This guide is focused on giving you a basic understanding of the champion and his preferred jungle routes/gameplay. If you are lower elo I recommend reading all the sections in order to get a better understanding.
Pros and Cons
Pros

Reliant on level 6 to setup ganks by yourself
There are really not that many more mentionable downsides to nocturne :)

Nocturne. I have also been playing again and

Nocturne still looks to be in a real good spot. I have seen more people run

Blade of the Ruined King after

Black Cleaver
12.6, 12.7
Like last patch I have been taking a break from league because I get too mad playing it :) but

Nocturne should still be in a very solid spot if you only look at the patch notes. So go ahead and practice :)
12.4, 12.5
I haven't been playing much here, but the patch notes were pretty straight forward in a sense that

Nocturne is pretty unaffected by the changes.
12.3
Alot of changes to bruiser items where basically HP gets converted to AD (partially) which makes them squishier. I still need further testing, but Nocturne should still be in a good spot, since he should be fine with trading defensive stats for offensive ones. I updated the items section a little bit, according to my observations and testing so far.

Not really game breaking changes, but neat buff in Nocturne's overall strength. I do not think anything changes build-wise or playstyle-wise.
Early Game and First Clear
Before the game starts always make sure you have a gameplan. Especially for the first 5min.

The main question that arises is: Where do you start your route (top/bot)?
You always want to start opposite of your winning lane matchups. Say your bot lane has a losing match up and top is winning. Then you start bot and path top lane in order to secure the scuttle crab. The worst feeling is pathing to the wrong lane and having to hand over scuttle since ur lanes have no priority. Note that due to preseason changes, the first scuttle spawns lose a lot of value. If you lose scuttle it is not that terrible anymore.

If both top and bot are losing match ups, it basically comes down to you making correct guesses. You need to start on the opposite side of the enemy jungler. So you have to think about which lane is most profitable for him to path towards to. This comes down to your game knowledge and the more you practice the more you will get this right. It just takes time.

If possible you always want to full clear into scuttle. You should be able to full clear in 3:15 so you are lvl 4 at scuttle. This takes practice though so head to the practice tool :)
Here is a guide on full clearing https://www.youtube.com/watch?v=qHpCSwmdzRI.

If you think the enemy jungle will invade you, you might want to place a ward on your other buff or jungle entrances so you can spot them.

Now there are 2 possibilities:
He invades you at lvl3. Here you just straight up fight him and call for your lanes unless they have 0 prio at all. Nocturne is a very strong duel champion due to his

Unspeakable Horror, so you should win most early 1v1 as long as you are even.

Alot of jungler will try to cheese you at level 2 by taking your buff after their own leaving them with 8 CS. But you should be level 3 shortly after they clear your camp. In This scenario you want to force a fight with the enemy jungler either in your own jungle if he stays or their own jungle which will have almost all camps up. Here you either kill the enemy or take his camps for free because he will be only level 2 at this point leaving him very vulnerable.
Note that if your lanes have 0 prio, you sadly just have to invade his other buff and try to secure it and basically split the jungle.

After your initial clear you should look for either a gank, counter gank or invade into the enemy jungle. You usually take the option which is most likely to work where invading is the easiest to pull off. Most jungler do not do a full clear. So after checking their CS you should be able to infer how many camps they have done already and act accordingly. (Each camp/scuttle crab gives 4 cs, 24 cs --> 6 camps, 28 cs --> 6 camps + scuttle crab and so on)
Mid Game PlayStyle
Your ultimate is probably one of the most broken ultimates in the game. Thus you do not want to have this ability off cooldown for too long.

Your playstyle is roughly as follows:
Use ultimate on most vulnerable enemy lanes or champs as soon as you can
Farm when

Paranoia is on CD and choose your pathing so that you always end up on the lane you want to gank as soon as ult is off cooldown.
Your

Rift Herald clear is pretty good. So grab these whenever possible, but you usually do not want to sacrifice your jungle camps for that.
For example if your bot lane jungle is up and you choose to do

Rift Herald , a good enemy jungle will take your whole bot side jungle and thus lowering the gained value of herald.
Late Game PlayStyle
In the best case scenario you should finish games before 30 minutes by snowballing out of control and out valueing the enemy by your efficient clear and ganks.
If this is not the case and your team somehow ends up in late game you should still have a lot of gold as long as you executed your mid game properly.
Here you usually want to set up vision around baron and try to make catches using your ultimate. In solo queue some random adc will definetely walk around alone no matter the elo.

Guardian Angel to come up and dive the backline and either kill or zone them. Make sure you survive so that your team can clean up the enemy front line.
Situational Items

Frozen Heart
This items value increases by a lot when facing heavy AD enemy comps. Especially if their mid laner is some low damage champion like

Twisted Fate and their main damage is AD.

Chempunk Chainsword
If enemy team has a lot of heal pick this.

Maw of Malmortius
Another option against heavy AP teams. It is quite hard to say when you should pick

Maw of Malmortius and when to pick

Wit's End. Generally i would say

Maw of Malmortius is the safer option since it gives more MR and also the shield if you drop low. You should prioritize

Maw of Malmortius against situations where enemy team has champions with high burst dmg (or simply very fed enemies).

Guardian Angel
If you are really strong and have big shut down on you, definitely pick this item rather than any of the others. The

Stopwatch is a really good pick up for 650g. I would usually postpone

Guardian Angel until you have used the

Stopwatch. If you would need

Chempunk Chainsword in the game rather pick up

Executioner's Calling and stick to it until

Guardian Angel is finished.
Note that the moment you lose the shutdown on yourself,

Guardian Angel loses a lot of value. In that case transition to the other items if possible.

Null-Magic Mantle which will give you alot of survivability. With the new changes in 12.3. This items is inefficient early game. I would only buy it starting at lvl 15 onwards.

Black Cleaver
Your most offensive item. In 12.3 this item lost HP for AD. Nocturne usually benefits more from AD anyways, but note that you will be squishier than before.

Death's Dance
Good pick vs full AD comps next to

Frozen Heart. Usually both good to pick up in these games. In 12.3 this item now also absorbs magic damage. Thus you do not really need a FULL AD comp to buy this. A team leaning on the heavy AD side is also a good point to pick this up. Unless the enemy is full AP, you should abuse this item, buy it either after your Mythic or at least as ur 3rd item since it is really broken.

Serpent's Fang
This makes you really squishy, but very good as a 4th or 5th item vs shield heavy teams.

Axiom Arc
There are people who like this item, but I feel like it is not too good on

Nocturne since you have low CD on your ultimate either way. Also it basically forces you to take fights to make the most of it. If you cannot, it simply loses a lot of gold value.
I think it also comes down to personal preference, but I would not recommend to pick this item up. If you do want to go more dmg heavy, rather go

Serpent's Fang.
Build Update 12.5
I have added a second build path which uses

Goredrinker. Before I disliked this build path, but against enemy teams where you are unlikely to make picks or against very melee heavy enemy teams, where you will not need the slow from

Stridebreaker this build is very good.
The core is

Black Cleaver. After this depending on the enemy team comp you either go

Spirit Visage is really strong since it buffs shields and healing. These 4 items work on many bruiser champs and not only

Nocturne so try it out if you can.
With this item build you can just straight out dive into team fights and stay alive for a long time, by playing around

Goredrinker CD.
Final words
All in all

Nocturne is a pretty straight forward and easy champ to master mechanically.
Thats why most of his impact is decided by your decision making which requires practice in the jungle role.
I have tried to explain a few things, but feel free to visit my stream to get a closer look and ask questions if you like :) (https://www.twitch.tv/umang94)
I might not always play

Nocturne since i tend to play the "op" junglers every patch, but general jungle pathing and tracking does not really depend on the specific jungle pick.

Also if you have any more specific questions you can always ask questions in the "discussions" thread. I'm happy to help if i can :)
Feel free to join our community discord to ask question if you'd like:
https://discord.com/invite/wc8A9AhH5j