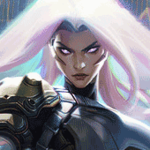 Blade of the Ruined King
Mythic

By Coorowko
Summary
I love playing Shyvana but she doesn't have a lot of diversity in her builds. That said I've started testing out a fun little build that diverges from the standard AD/AP jungle tank. This is On-Hit Shyvana,she primarily uses her Q to trigger the powerful On-Hit effects granted by items to chunk enemies and her W can enable her to chase down her targets. This build generates a ton of Fury, meaning you can very easily stay in dragon form for extended periods in combat and can regain it extremely fast as well. The downside of this build is that Shyvana is a little squishier than usual, though she still scales very well into the late game once she builds into more defensive items. I haven't had an opportunity to test the build in a proper game but so far it's been genuinely quite fun to play with, so I hope anyone who sees this build enjoys it.