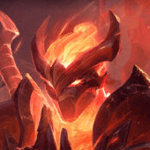 Try to use combo of E => Protobelt => E(with stun) then combo hit with passive, W and Q He would be pressured to either fight your or run thus giving you the opportunity to farm and powerspike him since you outscale him in mid game.

Try to dodge her skillshots and you should be fine, don't fight her until you have your protobelt for dodging skillshots and engaging. Don't tower dive her unless you have her ult and Barrier/Cleans(better case) up.

He beats you in both early and late game, your only opportunity is to outscale him and/or finish mid game. I suppose you should perma ban him.

If she's laning against you and you have gone for Cleanse instead of barrier your laning phase is pretty much done for. Her Q's just shred you too much.Late game you outscale her.

He has a lot of burst dps, don't let him engage since he's able to poke you early, fight him only if you have a stolen ult, if possible- his, play extremely safe, ask for assistance,

If she's able to time her Ult or acid you're pretty much done for, if you land your Second cast of E you've won the fight since she has to run otherwise she's dead.

Don't fight him until level 8-9 since you're very squishy and don't have a lot of sustain early game, you outscale him at mid game.

If you time your E's knockup with maokai's cc you're pretty much perma cc-ing your opponents especially with engaging abilities, together you can even towerdive best if he's tanking.

If you time your E's knockup with maokai's cc you're pretty much perma cc-ing your opponents especially with engaging abilities, together you can even towerdive best if he's tanking.

By roskataka
How to lane with Sylas' kit
Don't waste your time, steal other people's!


Since Sylas has a pretty much op kit by itself, if you're able to itemize him better, you're pretty much going to be destroying the enemy team even in 1v9 scenarios if played more strategically.

When you're laning, once you've all gone through the level one team fight you'll pretty much have to go to your lane as soon as possible since you have to get to lvl 3-4 asap. Since Sylas is pretty squishy you'd have to wait for your sustain and farm safely until then, try to poke the opponent and/or try to evade trades since you're up to a loss in the fight in the most cases.Once you've got Protobelt and have gotten to lvl 4 (with lvl 2 W) once you shove to the tower your wave, you can start roaming through the jungle( i suggest best that you use your e a lot and go most frequently for your and enemy raptors) if the enemy laner doesn't have a fast wave clear you actually have time to get your or their red buff and back.
Once you get your Lich Bane and lvl 6 powerspike you can start enaging a lot more, once you get ahead(you won't have a problem with this in most cases) you can start ganking other lanes and snowballing them. Try to disengage if you don't have either of those up: Protobelt/Cleanse/Barrier/Flash in best case Zhonya too.