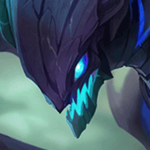 We're upping some of Eve's damage to help her saunter her way through early skirmishes and the jungle more reliably.

I am live streaming on Twitch: Twitch.tv/kami_khazix if you have any questions about League of legends or my Kha Zix guide feel free to join my stream and ask me there

is her gap closer and set up for her ulti

After reset go to Krugs and afterwards raptors

How to gank as eve:
Walk into lane in stealth
Walk up to the enemy laner that you wanna kill try to walk behind them
Channel your w

into 3x Q spam
Then you wanna press E

Note that you can also proc your W

while charged fully with your E

spam and then do the combo

Note:You don´t have to snipe them with the first Q

I stream on twitch.tv My stream

I stream almost everyday, usually from 19:00 CEST, which means if you are reading this guide in the evening, you are very much welcome to tune into my stream and say hello :)

- I stream in english
- I stream with Cam and mic
- I read chat while ingame so feel free to say hi or ask me anything about league :)

I Would really apreciate a follow/sub on twitch <3

If you have any questions regarding this guide pls come into my stream and type your question to me :)

Hope to see you guys on my stream :)
Support me

If you wan't to support me you can do that by following me on social media:

If you wan't to support me even more you are very much welcome to subscribe to me on twitch or donate to me.

By subscribing to me on twitch, you help me to get one step closer to get partnered on twitch which is my dream.

You can subscribe to me on twitch here: https://www.twitch.tv/subs/kami_khazix

If you wan't to support even more than that, you are very much welcome to donate to me
You can donate to me here: https://streamlabs.com/kami_khazix#/
21k followers rp giveaway

1. Follow my stream My stream
2. Be on the stream where I hit 21k followers
3. Type the keyword in chat on stream

Stalk and Seduce
By PsiGuard