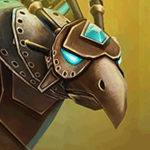 Jax is the kind of champ you love to face. Wait till he jumps in and blind him. Teemo is a strong Jax counter.

ADCs like Miss Fortune who decide to go top lane are also great for Teemo. They are all very squishy and you can get lots of kills early game.

Kled is great to face because when he isn't on his mount, his health is low allowing for easy Dark Harvest procs.

Mordekaiser is the toughest matchup Teemo will commonly face top lane. He isn't very reliant on auto attacks so your blind isn't that useful. He also has a grab, healing, and does insane damage early game. I recommend usually banning him.

Tryndamere is a great matchup for Teemo. He thinks he can tower dive you with his ult, but simply wait a couple seconds then ignite him. The combination of your poison, shroom DOT, and ignite should get him every time.

By aegiswings
Introduction
This guide is for Teemos who want the most plentiful and deadliest shrooms late game. There are two keys to doing this: maximizing AP and minimizing your ultimate cooldown. With the changes to cloud drake season 10, it is actually possible to get your shroom cooldown to around 4 seconds with 4 cloud drakes with the build detailed here! Even without any cloud drakes, you'll still be at 9 seconds.

This is a very late game build. That is not to say you will be weak in the laning phase but you may not score as many kills early on as you would with a build based around runes such as Aery or Electrocute. The goal early on is to CS as much as you can and charge your Manaflow Band and Dark Harvest by poking the enemy laner. Once you are able to roam, plant shrooms so that you can get assists to charge up your Ultimate Hunter. You won't really hit your shroom power spike until you've built your Archangel's Staff and most of your Nashor's Tooth. At that point you'll have 40% cooldown reduction and hopefully most, if not all, of your Ultimate Hunter stacks.

This build works great with patient teams, who are more defensive. If your team looks like it is going to lose by 30 minutes this might not be the build to chose and you'll just be beginning to shine at that point.

You'll be shocked at the quantity of shrooms you can plant late game and the damage they will do. You'll be getting assists (or stealing kills) left and right and will have no problem getting your Mejai's to 25 stacks. Expect to hit 1000 AP or higher. You'll have no problem carrying late game as you'll make objectives such as Baron and Elder Dragon impossible for the enemy team to take. Then you can lock them down in their base making them afraid to leave their nexus.

Late game, you'll have some huge power spikes when:
- Your Archangel's upgrades to Seraph's
- You complete your Ultimate Hunter (and Eyeball Collection)
- You build stacks on Dark Harvest (hoepfully at least 20-30!)
- Gathering Storm increases your AP (exponsentially!)
- Your team has one or more cloud drakes (50% of games have 1 cloud drake, 25% have multiple, 25% have none)

Late game you are going to want to secure objectives such as Baron and Drakes by flooding the area with shrooms.

You'll usually want to build your items in this order:


You'll notice no defensive items such as Zhonya's. That is because you shouldn't be getting hit too much as you'll be sticking mostly to tossing shrooms from the back line late game.