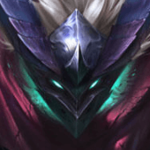 Runes: Where the Fun Begins

Paccu here! bringing a horrific build that never deserves to work in any elo, but manages to make me laugh

This is comically successful and absolute blast-to-play build, featuring as much damage as possible on 1 Garen Q to either immediately kill, or get someone to Ult health.

I find Garen to be rather droll to play normally, so this build was made to spice him up a bit (in norms). It makes his ganks slightly more effective, his clear reasonable, and his overall playstyle an absolute blast, especially when against squishier team comps.

This section will cover your first clear, how to gank, and strengths/weaknesses you have early

After a successful gank, back, or otherwise, attempt to get bottom Scuttle and your Krugs, then back for your Berserkers Grieves. Some tips for your first clear: Start E lvl 1, use Q as an auto reset, time your W with a jungle camp's attack due to its short duration, you can save a smite for Scuttle.

Here in this section, we learn how to play out team fights for objectives and how to gank as Predator Lethality Garen

Your clear speeds up significantly after just your boots and a serrated dirk, along with your damage output. As you do typically on Garen, your pattern is Q/E/AA. You have insane solo-target kill power at level 6, a Q, few hits of E, and R is plenty to kill most champs for free. With your speed and raw tenacity from W, play to pick the mid-laner/ADC in group fights, and try to deal as much group damage with E before peeling out with W and your amazing MS. Getting scuttle is so easy since Garen Q breaks it's carapace, and a full duration E is enough damage to typically kill it. You reach 1-shot potential around 2nd Item (Essence Reaver).

How to Gank as Garen:

Ganking on Garen is normally rather lack-luster, but with your high Q-damage and movespeed, it's rather simple: Pop Predator, Ghost, or both if needed, use Q to begin chase, silence the target, follow them for full E duration, use W with their CC, and R for killing blow.


Tips and things to consider when ganking:

1. Your Q cleanses all slows, and silences, so it can be delayed to avoid soft CC, on top of disallowing mobility for a short time. It is also what you max for the MS and damage
2. E is less impactful, but still very high damage with this build, but you don't build much attack speed for the bonus spins
3. W is a shield, but ALSO a burst of damage reduction and tenacity, this can be effectively used to cut short the target's CC or a way to take a heavy ability/tower shots
4. This one may be obvious, but incase you don't know, Garen R deals heavy missing-health damage, so it MUST be used as a killing blow to be effective at all, but it deals A LOT, so try to get them to around/slightly below 1/3 HP, then smite them down with R
5. Garen has amazing chase and dive with Q and W, make dumb spicy plays, you'll probably get away with it
Late Game/Item Explination

Covering late-game with this build, and going over the build and how it works

Make sure to always be clearing your jungle, Red Buff is amazing due to its slow in combination with your E, but besides that, now is time to use your sheer speed to make side-lane picks and charge the backline in teamfights.

1. Berserker's Grieves: Buying this early is crucial for your E speed, along with access to your Predator, simply the optimal boots here, its norms so f*ck itemizing otherwise
2. Duskblade of Draktharr: This item is for the sheer Q 1-damage, along with an invisible Garen spinning his way around a fight.
3. Essence Reaver: Spellblade proc on your Q, enough said. I know it grants mana return and Garen doesn't use mana, but frankly the damage and stats are enough to warrant it's usage
4. Stormrazor: Another item to contribute to a horrendously-powerful Q, along with the slow it grants for E chase/R confirm
5. Youmuu's Ghostblade: CDR?, Lethality?, Movement Speed Passive AND Active? You know where this is going
6. Final item is highly variable: E group slow with Serylda's, Collector to make your execute an execute (lmao), Serpents for shields, Edge of Night for heavy CC, etc
Ending Remarks

This build is purely for fun in norms,

it's silly, unoptimal, and has a rather clear lack of practicality. Is it fun? I think so. Is it good? Rarely. Am I a Garen expert? Who isn't, its Garen.
Thank you for reading through this build and I hope you enjoy it/find success with it. Go check out my other serious and not-so serious other guides I have on champs like Sett, Mordekaiser, Malphite, Jhin and more soon to come!