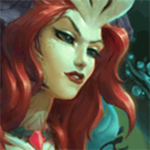 She will prevent you from bursting anyone down.

She will prevent you from locking anyone down with your chains. If she hits you with her snare you die.

I'm still figuring out the best way to play LeBlanc support.
It's not an easy champion to play as a support and it's really easy to totally ruin games if you make mistakes.
If you play well, she's great and will be very useful to your team.

I've been playing LeBlanc support since the end of S7 and am now still enjoying her greatly at the start of (pre) S8.
I feel the new runes have made assassins a bit stronger, so LeBlanc becomes more viable as a support.

I'm currently bouncing around in Gold but I'm sure I can make it at least to Plat playing LeBlanc support.


I will try to keep this guide updated as I play along.

Why? - Pros and Cons

Electrocute for burst damage, this does not seem to trigger from your passive, so you have to hit with 3 different abilities or 2 abilities and an auto attack or several auto attacks.

Sudden Impact for more damage after using your Distortion.

I always start with Ethereal Chains, since it gives you your only form of crowd control and can win a level 1 fight. It's also a great tool to invade with.
You could also start with Shatter Orb for some early poke.

Level 2 you can either take Distortion or Shatter Orb depending on your needs.
Shatter Orb will give you poke.
Distortion will allow you to engage or disengage.

Max Shatter Orb first for some easy poke in lane, it's a lot easier to hit than your chains and has a lower cooldown.
Ethereal Chains does a little more damage as you level it up, but it's not worth it. (It deals 2x 35 more damage at level 5.) The snare duration stays the same and the cooldown goes down from 14 seconds to 10 seconds.

Max Distortion second for a lower cooldown on jumping around!

ALWAYS buy a Sightstone first. Wards are an extremely useful tool for winning games. They prevent ganks, they set up objectives and kills, ...
If you do not buy this item first, do not play support.

Less than 800 Gold
Ruby Crystal > Boots > Control Ward
If you are fighting a lot or the enemy bot lane has a lot of CC or burst damage, get a Ruby Crystal for some extra Health, otherwise get Boots.

Get Eye of the Watchers for the extra ward and inventory space when you feel the need.

There are a lot of different options and play styles here.

If you have good carries and the enemy team has big tanks that will run up to them
(Cho'Gath, Darius, Gnar, Galio, ...)
Rush a Void Staff so you can take them down and keep your carries alive.

If you have good carries and the enemy team has melee fighters that will run up to them
Rush a Rylai's Crystal Scepter to slow them.

If the enemy team has one or more squishy targets you can kill
Rush Luden's Echo for some extra burst damage.

If you are fed and the enemy team has an assassin that keeps targetting you
(Zed, Talon, Shaco, ...)
Rush Zhonya's Hourglass so you can stay alive.

If you keep getting locked up by CC before you can do anything
(Morgana, Fizz, Lux, ...)
Rush Banshee's Veil so you can't instantly die from one random spell.

Please leave any constructive feedback in the comments, so I can update the guide where needed.