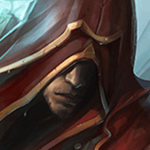 Try to bully her level 1 maybe level 2 after that you will probably get fucked. If she misses her E try to punish her.

By Implyy
Guide To Being A Warlord
An Acquired Taste (PASSIVE)

Against enemies with three stacks, his Tongue Lash and Devour are enhanced.

If Tahm Kench slathers an enemy champion with three stacks of An Acquired Taste and then hits them with Tongue Lash, he consumes the stacks to stun them for 2 seconds instead.

Devouring an enemy champion halves the ability's cooldown and refunds 50% of the mana cost.


Passive: 45 / 50 / 55 / 60 / 65% of damage Tahm Kench takes is turned into grey health. Once he leaves combat, the grey health falls off, healing him for 30-100% of the amount of grey health he has earned (depending on level). This passive is unavailable while Thick Skin is on cooldown.

Active: Tahm Kench converts his grey health into a shield that lasts 2 seconds.

Thick Skin's cooldown starts when the shield expires or is broken.


Tahm Kench opens his maw for up to 6 seconds, offering an ally a spot inside his belly. Once they jump in, or once Tahm Kench decides he's diving solo, he starts channeling, conjuring a whirlpool beneath him before diving in, reappearing a few seconds later at his target location.

My IMMORTAL Tahm Kench Build (All Lanes: Top/Mid/Jungle/Bot)
By BaLoRi