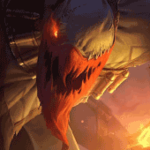 Any hook champions are your biggest nightmare. Be careful against blitz, nautilus, pyke, and thresh!

By 0zarkian
A Note Before the Guide
I assure you that this build is tried and tested as it did get me to m7 fiddlesticks extremely quickly and has gotten me multiple S and S+ ranks. With a little time and effort, any player can rock this build with ease. It won't disappoint.
Quick Game-Play Guide

E hard early game. If you can get a crow to bounce in-between two enemies you will deal massive damage. For poke you can do what I call minion chaining and throw a crow at an oncoming line of minions. It will go up the minions and if any enemies are near by it should prioritize them, giving you free poke from extremely long range. This combined with

arcane comet is what makes this champ so good.

Zhonya's is your friend. Don't use it defensively.

Ult into tough team fights or odd matchups, fear the enemy and zhonya's.

Drain is low priority in this build and you don't want to play aggressively at all unless your diving with ult. You can run back and forth (I know it sounds dumb) and get off easy poke damage and make enemy attacks miss.[/b]

flash for escaping because fiddlesticks is a squishy champ, although sometimes you can use it to get close to an enemy for your

E them if they are low on health.

ults. You can easily ult over a wall to finish off unsuspecting enemies with a kill.

spellthief's edge and potions. Leash and ward in between dragon and blue buff rather than in river bush in order to avoid ganks more easily. Save up until you have enough gold for

frostfang and then recall. Unless you get low on health, don't recall before then and play it safe. Even if you run out of mana, just auto until you get that gold. Buy

control wards with extra money every time you return to the shop.

is excellent for poking with your

. You can also take aery but I prefer arcane comet because if you send your crow down an oncoming minion wave and it hits an enemy your

will show the area it hits and therefore location of an enemy when it hits.
-Your

takes up a lot of mana and if you constantly

minions or enemy champions you will run out of mana pretty quickly.

will help with this.
-

used to be the best rune to take for the third sorcery slot. With patch 8.23, celerity was reworked and is no longer good for fiddlesticks unless you're using it for his passive.

in my opinion is the best alternative. It helps with cool-down reduction significantly.
-

to make this build so good.
-For your secondary runes, you have two options. You can go

quickly and increase your CDR futher. The second option for your secondary runes is to go

to combine with your

's silence for extra damage and

for a better vision score.

Dark Wind
-Cost: 70/75/80/85/90 mana
-Range: 750
-A wisp of wind strikes an enemy unit and then bounces to nearby enemy units, dealing damage and silencing the victims.
-Unleashes a Crow at the targeted enemy, dealing 60/80/100/120/140 (+45% Ability Power) magic damage before bouncing to another target. Units struck are also silenced for 1.25 seconds the first time per cast.Dark Wind can strike up to 6 times and will prioritize enemies being Drained or ones it has not yet hit. Deals 200% damage to monsters.

is excellent if you are waiting in a bush to

. You will receive extra movement speed after ulting or if you need to run away.
-

is excellent for getting off free damage on enemies and escaping when being chased down. It is important to note that your fear doesn't count as impaired movement for runes such as cheap shot.
-

can shred epic jungle monsters such as dragon or baron. Don't solo them though. You will lose more health than you gain. Drain uses a lot of mana so use it conservatively. If you cancel your drain before it is completely finished, time remaining will be added to your drain's next cool-down. Gives massive sustain.
-

is the star of this build. You need to max this as quickly as you can, upgrading it every chance available (not when ult upgrade is up). If you can get a crow off on two enemies with no minions nearby it will bounce back and forth dealing massive damage. Another strategy is to

up an oncoming minion wave. It will prioritize nearby enemies and your

will reveal where they were if you follow it.
-

is good for diving enemies. You can ult over walls to surprise enemies.

is excellent with your ult. When you combine these together you can dive into team fights or into bad matchups to turn the fight around.

needs to be saved for escaping enemies as fiddlesticks is a really squishy champ. Sometimes you can use it to secure a kill if you really need to.
-

just adds to the poke of this build. Basically means a free kill in most matchups if you play them correctly.