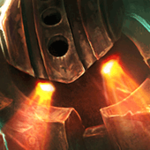 Boots
First Back (With Kill/Assist)

She farms on par/faster than you, has exellent ganking potential just like you, and probably defeats you in a 1v1 jungle skirmish. Consider banning.

Same reason as above.

By Corgi1315
Something about myself
Welcome to this guide! I am Corgi1315, playing in the EUW server. Contary to the competitive nature of the game, I tend to enjoy League more in an RPG perspective.

Rather than singling out the mathematically most efficient build, I would usually construct my playstyle around the lore and the personality of the characters I am playing while immersing myself into that persona. This often creates interesting builds that are nontheless effective in game. This build I will be sharing today would be the one that resonates the most with me. I hope through this build you could all feel the power fatansy of the character, and enjoy League from a new perspective.

'The Sea Does Not Care'
Imagine being out of breath deep under water. You rise up longing for that breath of fresh air, only to be dragged back into the depths again by an unrelenting force.

This hunk of metal known as

Nautilus knows it all. Betrayed by his ignorant former captain and swallowed by the sea,

Nautilus became the wrath of the seas itself when he came back. From then on, he would relentlessly chase down, and sink all who was foolish enough to disrespect the seas, making sure they experience what he had.

This gank heavy, speed and armour centred jungle build and its associated playstyle is about presenting exactly that, and was built for a sole purpose: to make sure anyone you want dead never outrun you, and DIES. Become Nautilus, and let your opponents know that no matter how they try to escape, the sea does not care.

, Nautilus actually acquires decent clearing speed and could do a healthy full clear without potions.

The pathing can either start from Blue or Red, depending on ganking potential of top and bot lane. It would then be:

In order to maximise clear speed, remember these:

right after an attack hits you to conserve the shield, so that more empowered attacks can be used.

right after an auto-attack lands to cancel its recovery.

-When cooldowns allow, use W

to cancel the recovery of E

-Your passive, the root

, actually provides decent bonus damage early game. When dealing with wolfs/krugs, remember to hit everyone once before focusing down the big one (The small ones will be whittled down by your jungle knife

burn and your W

Nautilus due to his shield

and large health pool. Meanwhile the choice of Aftershock

would provide us with surprisingly good early game damage. Therefore, if you met the enemy jungler by themselves in the jungle pre-6, as long as they are not surprisingly durable and your health is full, do not hesitate to all-in and auto them to death. As long as they do not have ignite

, you will be surprised at how strong

Nautilus is as an early game bruiser.

One thing to note is that although you are all powerful in ganking (as I will explain later), that power comes mostly from your ability to CC and not damage. Being a tank specialized in mitigating damage,

Nautilus is very slow in dealing with dragons, the rift herald, and Nashor. Therefore, even thought

Nautilus can solo kill dragon and the rift herald, it is adviced to call for teammates' help since he would do it painfully slowly.
Early game ganking logic
This is the most important part of this build.

Nautilus is usually played as a support and he is suitable for that role because of his kit packs an enormous amount of CC. With this, he provides a lot of teamplay utility with his kit along.

Now consider that in a jungler's perspective. When ganking from a side of a lane, after 6, you will have a root

There are 5 CC abilities at your disposal, and some of them, like the passive root

Even better, these abilities all pack a decent punch early game, especially for squishy midlane targets and ADCs. Therefore, with the correct order and timing of these abilities and the extreme speed of this build, a kill is almost guaranteed when ganking.

The ability order when approaching a gank-able opponent is thus crucial. At first sight it may seem optimal to engage the target with Q

, following up with all other abilities. In my opinion this is not the best, as Q

is easily evaded at longer ranges or blocked due to its large width, and the gank would easily fail when that happens.

Instead, the logic of initiating a gank should be to simply flank your target by walking towards/behind him without doing anything. They will thus realise that they are being ganked, and will either try to fight or escape.

If you can catch up with them in any case, hit

them and thus they will be rooted. Use W

to slow them and impede their retreat.

Should the opponent survive the ordeal, or when you failed to catch up and hit

in the first place, the opponent would likely try to escape this 1v2 situation as quickly as possible and may burn ability dashes and even summoner spells

towards the opposite direction. After which they are likely to run a straight line in their preferred escape vector.

Here is where the magic of this playstyle sets in: NONE of these matters, you do not care. Your Q

is longer than a flash

will most likely be faster.

When this happens, follow them, and wait until they get as far as possible within your Q

range. Waiting as long as possible is important, not only for tormenting their souls but also because of your passive root

refreshes every 6 seconds per target. If your second root

readies before you drag them back into you, they will, unfortunately, be rooted again, and will, in most cases, die.

This procedure only uses 3 of the 5 CCs above, not even using R

, and thus is perfectly practical at levels as low as 3. (By all means, go put the enemy Yasuo through that after finishing your 3rd camp, you will probably thank me later) When all 5 was added into the mix, you can practically perma-root an opponent, guaranteeing their death.

In the very unlikely situation where a low health opponent survives everything and gets under their tower successfully, do not hesistate to towerdive if hp allows, as the shield from your W

will likely tank at least 1 shot from the tower.
Mid-Late game
In the Mid-Late game you will probably have your chemtank

ready, together with 4-5 stacks of relentless hunter

. At this point your fully built-up movement speed can easily exceed 500, while your armour values will be over 200 thanks to Conditioning

. These essentially makes you an unstoppable force during teamfights.

The way I recommend to approach teamfights is rather simple: either start with R

or build up the speed from deadman's

first, and then activate chemtank

As with before, proceed to walk towards a certain pick such as the ADC at incredible speed. The armor and the W

shield would keep you from dying before you reach the target, and after you reach the target you could usually hold for a good few seconds under fire from 3-4 opponents if the game is going toe-to-toe. During these seconds, remember to use any ability when they are ready to provide more CC for your team, and more survivability for yourself. Remember your abilities cooldown fast, and more damage absorbed means less damage taken by your team.

The enemy you pick however, will usually be rooted

, and suffer a much more terrible fate in a full-fledged teamfight. As before, remeber to not use your Q

until your opponent is at the brink of escaping to maximise your effectiveness (and satisfaction)
Conclusion
As described above,this build focuses on ensuring a target's death by mitigating damage with armour and increasing the chance of a successful flank by building speed. Once reached the target, you should spread out the use of every ability OTHER THAN Q

to maximise the control imposed. Use Q

only to drag the opponent back at the last moment to make time for abilitie cooldowns.

When playing this build, just remember to simply walk

towards them and beat them with that giant anchor

them back. If they escape again, blow them up

. If they hide behind a tower, walk in and beat them to death. The sea does not care.

Nautilus, and you shall not fall until they sink before you.