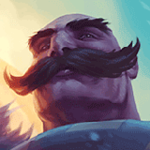 Remnant of the Watchers

Knight's Vow
Buy on every Return

Eye Of The Storm

By Tourizm
Welcome
Hello! I am Tourizm a long time League of Legends Player since season 3! Since Season 5 I have almost just played Support in all different variations, styles, and Champions.
I have peaked in Diamond 4 last season, were I maintain until today. Since Janna came out her Kit, Playstyle and Champion design hooked me. Until today I play her regularly and overall I've played over 500 Janna Games in Gold-Diamond Elo.
I attend to stream regularly and if you want I would highly appreciate it, if you check out my Twitch Channel. Here Is my Channel

The "Good" matchups: Janna is amazing at disengaging all-in champions such as Leona and Thresh. Her shield negates most of Zilean's early game bombs and she can disrupt two of Fiddle's moves. It should be a very smooth lane for Janna as long as you know what you're doing.

The "Even" matchups: These champions have great lane sustain and engage, but against Janna, it will be somewhat hard to get a kill on her or her adc. At the same time, however, it'll take some flashy plays or a gank to get a kill on the enemy bot lane.

The "Bad" matchups: Though Janna and her adc can still win a lane against these champions, Sona and Soraka's heals make it very hard for Janna to do much. Braum can shield your tornado if not careful and Morgana can spell shield Janna's engages, forcing her into a very passive and defensive laning phase. Ganks will most likely be needed if you want the advantage.
Game Play

Your goal number one it to get your ADC safe through the early laning phase.
Play safe and wait for opportunity windows, generated by enemy mistakes or your jungler. Keep poking the enemy with autos and your W. When your getting ganked disengage with your Tornado.On the other hand when you're getting a gank CC the enemy with your tornado.

When you got in the Mid Game you should be able to outsustain every fight.
Your shield gives the Damage of 3x

Long Sword and this should really hurt the enemy's.
Ensure that you play around your vision and get your vision set properly. Destroy Enemy Wards. Dont be around when you are low on health

Vision is the key factor in this stage of a game. Make sure you Ward and De-Ward propely and get your team vision for important objectives etc. Always stay in Range of your ADC to protect him.
Now you should be able to peel almost everything with

Howling Gale
You can heel, peel and protect. Your utility item Pathing now really should pay off.
Movement Speed, The Passive Strenght of your Shields and the Abilitly to Peel and Protect should save your carry.

Early Game: You want to position yourself safely. Keep in mind she's very squishy, but you need to have presence. Don't simply stay behind your ADC the entire time. Auto attack a couple of times with your shield on you. Don't go in for useless trades where they land the attack first. Punish them if they ever get near your attack range. Make sure you stay in range to shield your ADC whenever possible.


Mid Game: I would recommend to stay with your ADC or with the one who is carrying the team at this point. Janna excels at keeping people alive, but she also does wonders at chasing down kills. Make sure you take some time to place some deep wards around the map in between lane rotations.


Late Game: This is where Janna shines. Her late game impact in team fights can either assure a certain victory or a humiliating defeat. You want to stay with your team at all times. If you want to engage, make sure you separate their front and back lines with a good flash-monsoon.

「10.1」Carry with the Storm's Fury
By KingNaki

[9.24] Blow Them Away - A Comprehensive Janna Guide
By Jointed