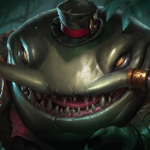 Wit's End
if you are ahead

By Bufo
Some cool music :)
Why Tahm Kench?

Tahm Kench is one of the best tanks in the game and has the opportunity to save allies from certain death.

Abyssal Voyage gives you a great opportunity to roam. In the early game, he beats almost all other top champions. And I think he's one of the funniest champions to play.
Abilities

Against enemies with three stacks, his Tongue Lash and Devour are enhanced.

If Tahm Kench slathers an enemy champion with three stacks of An Acquired Taste and then hits them with Tongue Lash, he consumes the stacks to stun them for 2 seconds instead.

Devouring an enemy champion halves the ability's cooldown and refunds 50% of the mana cost.

Passive: 45 / 50 / 55 / 60 / 65% of damage Tahm Kench takes is turned into grey health. Once he leaves combat, the grey health falls off, healing him for 30-100% of the amount of grey health he has earned (depending on level). This passive is unavailable while Thick Skin is on cooldown.

Active: Tahm Kench converts his grey health into a shield that lasts 2 seconds.

Thick Skin's cooldown starts when the shield expires or is broken.

Tahm Kench opens his maw for up to 6 seconds, offering an ally a spot inside his belly. Once they jump in, or once Tahm Kench decides he's diving solo, he starts channeling, conjuring a whirlpool beneath him before diving in, reappearing a few seconds later at his target location.

Grasp of the undying is the best option for

Thick Skin, you gain 1-10 armor and magic resist based on level, and also improve your next basic attack.

Second wind is great for

Tahm Kench.
Because after taking damage from an enemy champion, you heal for 6 +4% missing health over ten seconds.

Second Wind helps you stay on the line longer.

from overgrowth you get health. If you are against hard matchup you can take

Gain 3% attack speed plus an additional 1.5% for every Legend stack (max 10 stacks) for a maximum of 18% attack speed. Legend: Alacrity is great for

Tahm Kench, because it will help you with stacking passive.

Your core item build it every time.
build it as your first item when are you against AD opponent on lane

Thick Skin
build it as your first item when are you against AP opponent.

Ninja tabi against AD. Mercury's Treads vs AP or a lot of cc.

is good item if you are ahead.

build this item if you are against something like

Warmog's Armor gives you a lot of health + health regen.

build this item if your team need Grievous Wounds.

if you need some resists
Other items vs AD

THX for reading my guide!

My IMMORTAL Tahm Kench Build (All Lanes: Top/Mid/Jungle/Bot)
By BaLoRi

[10.20] EAT EVERYTHING with Tahm Kench | Supp
By sashadidntwalk