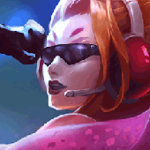 Blade of the Ruined King
Pick one, PD for AS, SS for farm and aoe dmg

Infinity Edge
Buy whenever a tank is wrecking you in 1v1s

Range is irritating, can poke while in lane, can feed on Vayne early game and ruin her late game. Ask for ganks from jungler, farm and if they're low, poke them out of lane.

Easiest lane a vayne can possibly hope for. Vayne can tumble out of Lucian's Q and W. Favors Vayne when trading damage. After 6, easy to wreck Lucian.

I don't even need to talk about this. Draven's late game Q can basically 2-3 shot Vayne. Only chance you have is knocking him into a wall with E and fighting him with your support.

Ezreal, easy lane. Vayne can easily kite Ezreal's abilities, she can Q out of Ezreal's Q,W and R. Ezreal can only rely on E and autoattacks when fighting a vayne.

Does quite a lot of damage in lane, his W makes him pretty damn strong, his E can be used to slow Vayne if she tries to escape. Try playing passive until you get the core items, then you can 1v1 kogger.

Pros and Cons of Vayne

Pros-
-High early game burst
-One of the best chasers in the game
-Devastating carry at late game.
-Snowballs extremely well, can be incredibly frightening when fed.
-One of the best hard counters to tanks/tanky dps
-Lanes extraordinarily well against melee champions

Cons-
-Early game burst requires you to remain in range of your opponent for extended amounts of time.
-Can be punished like Vlad. After her initial burst, you can usually harass her back for more damage than she initially harassed you due to her lack of ability to back out of a fight after tumbling.
-Is completely shut down in the laning phase by those with longer range or those with poke/retreat capabilities.
-Very item dependent in mid game, and might get shut down too hard if she did not do well early game.
-Other carries will tear through her before she can complete her burst combo.
Who am I?

Hi, i'm a platinum 4 vayne player, I have had lots of experience with vayne(2 years) and I felt like sharing my ideas with you guys. Please comment if you feel like my build has any wrongs.

ProVayneMayne Vayne Guide
Vote Vote
Vayne: GOSU APPROVES!
Pros and Cons of Vayne
Who am I?