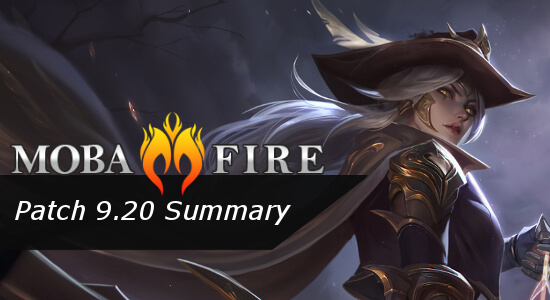 Hello and welcome to the MOBAFire Patch Summary - 9.20!

The most significant changes introduced in this week's patch fall to

Viktor, as Riot aims to freshen up their kits and alleviate some common issues which prevent them from hitting their champion identity and feeling exciting to play for players new and old.

To this end (and among other changes made),

Garen no longer has the Villain mechanic on his ultimate

Chaos Storm will now continue chasing champions after he dies and over terrain.

Outside of these adjustments, the number of changes made to champions is relatively small this time around, though

Ivern's conversion to a ranged champion does deserve a mention. The patch also includes a buff to

Locket of the Iron Solari's shield and three new High Noon skins, which will be released on October 10.

As always, be sure to check out the full patch notes for details on any changes that interest you (or, if you're more interested in Teamfight Tactics, click here for the 9.20 patch notes for TFT).

That's it on our end, time to hear from you guys! What are your thoughts on the changes made to

Viktor, and which of the three will most benefit from them? Which other buffs and nerfs are you hoping will be made by Riot in the (near) future? And finally, are you looking to pick up any of the new High Noon skins?

Hope next patch will bring a

Thanks to Jovy for the Sig :)