Lady Amelyne (35) | December 15, 2018 1:33pm
Pyke is always good, the only champions that can actually do anything to him are Leona, Alistar. Try E max Soraka with Grail rush.
1 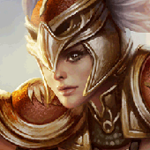 engage rely entirely on her ulti

Hamstertamer (74) | December 8, 2018 4:30pm
That's actually a pretty good idea. You can't eat an ADC that gets pulled by a Blitz hook, but since Thresh hook/flay pulls them gradually over time you can always get in position to eat them. Will try.
1

Apart from Morgana, Alistar should work I think. Has a nice combination of disengage (W) for those nice jungle surprises, and has the tools to make Thresh regret hooking those horns close to his carry. As an added bonus he can make it quite hard to get to that lantern as well. His CC and R don't hurt Ali as much because of his W and R. Make engaging on you not worth it and Thresh is just a lackluster poke champ with not-so-great tankiness but with some nice disengage. Something you can lane against. (until he gets crazy again late game, nothing can be done against that except for covering your carry..)
1

So the way to deal with hooks is MOAR HOOKS? Nice game rito xD

Oh and Thresh hook has 200 more range than Blitz hook so I don't see myself winning the hook war, in fact that matchup sounds like it would tilt me even more -_-

Latest Legend wrote:
Apart from Morgana, Alistar should work I think.
Looks like another 50/50 to me, probably even Thresh favored. If his ADC gets hooked Ali can either combo the enemy ADC and go for the coinflip, or just peel with W and take massive damage, but either way you're out and have to base. At the end of the day "not feeding" isn't winning.

The main problem I see with these melee CC supports is that Thresh's skills are melee and have basically no cooldown. His hook is on a 9 second cd with that ridiculous cooldown reduction when he hits it even on a creep, and

Flay is on a 9 second cd as well. So he can basically bounce you around permanently and peel his ADC as much as he wants, there's no way you'll ever land

Trample stun on the enemy ADC for example.

Even if you stack tenacity on melee supoprts (

Legend: Tenacity), it doesn't solve your main problem, which is getting perma-kited with

Two of Thresh's skills are purely melee range (flay + ult) so I don't think melees are the answer. I'm thinking more and more that a ranged with

Cleanse is the most direct counter to his kit, since he's safe from anything he can do. I've managed to beat Thresh's with that lately.
1

Well, you're not going to let him hook your carry right? You eat that hook (if your carry is stupid enough to stand in front of it) and if he decides to jump on you or they get too close, you either engage with Q or just self-peel with W. (you won't travel with them if you hit them early)

Getting hit by his hooks is a lost trade because it's supposed to be that way. Only solution is to dodge that ****. BUT you can occasionally turn it around with Ali by using R immediately after getting hit and then going in. And at least you won't instantly die in contrast to most squishy ranged supports.

I wouldn't say Thresh is great at all-ins, he has nice CC and initial damage on his E, but it's lackluster after that until his cooldowns get back up. By that time he or his carry should be knocking on heaven's door (he's not that tanky). (he has no escapes, only peel, and he's just used part of it by grabbing you closer to him) Note that his CC gets ridiculous cooldowns only after laning phase, during laning phase Alistar's cooldowns should be able to keep up just fine.

So yeah, Alistar works in my opinion. Leona too like Amelyne said, she's also sticky, can take the initial harass and then go all-in. Thresh won't be able to run from that, and won't be able to fight it.

Ranged glass cannon theoretically works very well against him (if you and your carry dodge everything), but in practice a sturdy, sticky all-in champion works better in my opinion. I'd say that's more 60/40. Can't get much further from 50/50 if it's Thresh, he's just in a great spot.
Load more comments (1 more replies) →
1

Flay you away from whoever you jump and you'll get perma kited. Flay has a lower cooldown than Leo/Ali's gap closer and has 0 counterplay.

Also his CC does actually have a ridiculously low coooldown now even early thanks to that absurd 8.19 buff. And every Thresh under the sun runs the new cdr offense rune and

Jovy (945) | December 8, 2018 5:11pm
I like Braum and Morg, she's pretty much good against everyone but yeah if she's banned then that sucks. Thresh is hard to deal with with anyone though, especially if he's a good player.
1

Cleanse. This way he has to land two hooks within 3 minutes to do anything to you, so you can bully him and take control of the lane.
1

Thresh is anything that can poke him out of lane. He relies on his passive to scale into the mid and late game, so punish him for trying to collect souls and poke him to death. The more he dies the squishier he will be and the more useless he is. Your best bets are damage supports like

Morgana is his greatest counter because of the spell shield negating his hook. In any case, you need to dodge his

Death Sentence. The thing that makes it easier to do against

Thresh is that while his hook has a greater range than

Blitzcrank, the cast time is rediculous. If you dodge to the side its easy to avoid. Your other option is to force him to take a stupid play and separate him from his ADC. He has no escapes and very little mobility.
1

Brand, I play him quite a lot these days, and I really don't see how he counters Thresh, I even feel like the matchup slightly advantages Thresh. Sure you can sit behind minions and spam

Pillar of Flame on him or the ADC, but Brand's stun combo require him to have a direct line of sight between him and his target, and the whole point of Thresh is that you should sit behind minions all the time, so basically you have only one spell. Also because of this Thresh ends up controlling the bushes unless you waste your wards, leaving your lane open for ganks. In fact when playing Brand I always control the bush except in a few matchups and Thresh is one of those.
1

Thresh is easily counterable in the right circumstances. It's actually easier if you bait him into hooking you. When he winds up, drop your

Pillar of Flame on him. Then before his hook lands, use your Q. It will stun him longer than you will be stunned by the hook. Then all you need to do is pop your e when he pulls you halfway to him. This will do massive damage.
0

Thresh is a skill match-up in

Pyke from using his

Phantom Undertow to engage/disengage. This applies in some form to most melee supports. However, keep in mind his weaknesses. He has no escape, and he doesn't get armor per level, so he's rather squishy earlier, especially relative to melee supports, making him easy to punish if he misplays, which is why he is weaker the lower the elo he is played in.

To go more in depth, if

Death Sentence on your carry to try and initiate, you can counter-initiate reliably as he can't use

Death Sentence to cancel a melee support's initiation. If he tries to use

Death Sentence on you, and goes in on it, he's in a way more vulnerable position than you are.

Heavy poke supports can poke him pretty hard as you said, as he has no reliable sustain or defences to stop it without going all in. If you can keep on poking him to a point where his health is too low to go all in, then lane will be in your favor. However, getting caught by his

Death Sentence can literally be a death sentence due to the squishy nature and lack of escape that poke supports have.
1

Death Sentence to cancel a melee support's initiation.
Actually, he can cast spells during

Flay. Just tested. It disarms him, which only prevents attacks.
1

Death Sentence where he has to channel it. It's very brief to the point where you need very quick reaction timing to be able to connect with him. The best thing you can do is practice against this matchup often so that you can know a mistake when you see one. It's really hard for

Thresh to recover from a mistake.
1