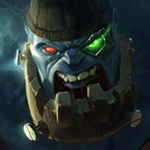 By Somethingnew
Some important things

My English is not very good and I do not have a lot of approaches to the English words of this game, so I hope you try to think if there is something I write that you do not understand.

The new item system helps us create a lot of interesting playstyles. You must have played or seen people playing the assassin Garen in the previous seasons, right? A brutal version of Garen? Yeah! But obviously you also see that Garen has nothing to lunge at his opponent beyond Flash. However, with the new items at the present, the situation seems to be much better. The appearance of Prowler's Claw brings a novel wind to the assassin champions. The ability to dash instantly with the range which is equivalent to that of Flash greatly aids in reaching the target. And for a champion that lacks a way of quick approach like Garen, this is a pretty good thing for us to effectively deploy assassin playstyle.

I am not a good player, but during my games, I see that this build is good to post here. Hope it will help you and hope you point out the shortcomings and limitations.

When you look at the first part, you will probably find some things that don't seem right, so I'll explain them here.

1. Why does Garen go jungling?

- When you go jungling, you will be more active in terms of items because you can just build the items which are set. If you go laning, some matchups may cause you to build other items to stay well in lane, thus affecting the playstyle. But if you are confident in your capability, just go laning.

- Garen has no problem killing jungle monsters. You don't have to worry about having too little damage or taking too long to kill a monster. It is okay that you can start at Blue Sentinel or Red Brambleback.

- Garen still has good competence for gank if you are smart. In the part of skill sequence, that I maximize E first is to quickly kill monsters, but if you have trouble ganking, you can add one E point at the beginning and then max Q first.

- Garen was created as a top laner and a fighter, so when you go top lane but build an assassin item set, there may be some tactical limitations.

- The starting item should be Hailblade because smiting enemy champion will give you a bit of speed.

- The mythic item that needs to be built is the Prowler's Claw and the reason for it, I said above. There's another item for physical-damage champions that can also help to lunge is Stridebreaker, but it is clear that the Prowler's Claw has a much longer range of execution and helps increase lethality despite its cooldown being a bit long.

- Another important item that needs to be built is Youmuu's Ghostblade. Even though there is an approaching item, movement speed is still a necessity.

- Shoe and 2 rests, you build them depending on the match situation. You can build the items that I mention in the situational item list which I create above if that works.

Looking at these items, you will see up to 3 items with activation, so it may be a bit difficult at first for those who often forget to activate items when necessary.

I have proposed 3 runepages above. Choose the one you feel appropriate.

There are many champions that cause problems for Garen but among them I see 2 champions you need to pay attention to are Master Yi and Vayne. It's better to just ban it if it's necessary.

- If you get the right items I recommend, you will have a good amount of armor and magic resistance but I would say that the new items for mages, marksmen, and continuous-damage fighters significantly improves their amount of damage. So you should play Garen like a real assassin and do not rush into the enemy team alone like when you are a tank.

- Garen's skill set is quite simple, so I don't need to talk about skill combinations.

End Thank you for your visit.