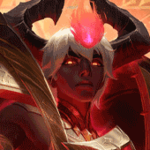 Probably ban vayne. You lose to tankshred carries, and she's as bad as it gets.

By ultrafen
How to Play
Basics

Be a gremlin for the stacks. You can get one heartsteel stack per champion per 40 seconds, which usually means up to 5 per fight. The goal for any Heartsteel user is to get a stack on every champ, every fight, and to fight often to build stacks quickly.

Fizz has the perfect abilities to get all five stacks during a teamfight. A low cd dash with your Q provides enough gap close to almost always get the heartsteel stack as soon as possible.

Your E does this as well, but its added benefit of untargetability gives it another bonus: While waiting the 3 required seconds for heartsteel to charge, you can stall for time. As well, you can take losing fights to get a stack or two, and then still escape without dying.

You have the benefit of your W to give you an AA reset, which pairs well with ensuring the stack, as well as just being useful overall with Titanic Hydra.

Your R can guarantee a stack due to its slow and knockup, allowing you to catch backline opponents and CC them to win fights, as well as get the stack.

Bot Lane vs Mid Lane-- Which is better?
-Both Lanes see heavy fighting all throughout the game, which is why they are the only positions recommended for this build. I personally believe Bot is better because you won't be doing a lot of damage until after you get heartsteel, so having a support that can assist in doing damage can make or break your game. As well, a fed enemy adc is terrifying to a high Hp build: best to make sure they don't get fed by shutting them down yourself.

Does it work?
-I've played a few games with it to fine tune the build, and believe that this is close to the most optimal build for Fizz. On those games, even when running suboptimal items, I found that Fizz can easily stack at least 1,000+ HP before 30 minutes, giving you a maximum health pool of around 6k by that point--enough to make tanks like sion or cho'gath look like babies. You still lose to high damage tankshredding carries, though your mobility allow you to beat adcs before they can shred you.

Chances are, this build won't work in the near future. In fact, it might not even work immediately after I post it--the new patch comes out tomorrow, and they're probably going to nerf Heartsteel due to the constant abuse by champs like Diana, but even if it does get nerfed, I'll keep this build here as a monument to how much fun I had terrorizing games with the OPness that is Heartsteel Fizz.