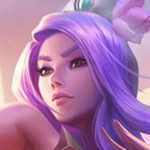 Rapid Firecannon
Boots (tabi or mercs if you are behind)

By Slight
Lane
Go for level 1 trades with Jax due to his weak early game and your strong level 1. throughout the lane keep poking him with your Q E combo, this will gradually take down his hp bar since his E is on a long cool down. However don't let him walk up to you with his E, an E AA W from Jax still deals significant damage. Once level 6 keep poking with auto attacks and position properly to avoid getting stunned. if you play correctly he can't stun you. Q max is for a better slow earlier in the game to minimize all of his attempts for a stun since the champion still does insane damage. Also if you die to him twice should be lost if he is good :)
Mid Game
He won't out scale you until past level 16 and a couple items so you are able to split push. However, if you are not able to kite him you will lose an all in so be careful of him in a bush. During team fights stay behind you tank while trying to focus the Jax so he can't attack your back line.
Late game
Jax will beat you in the late game, however Stormrazor and rapid fire cannon are your best friend in a 1v1 against Jax along with spamming your W to kite him he shouldn't be able to reach you. If he manages to try to flash the stun as your last chance to survive.