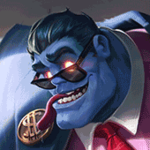 Akshan is a hella broken champ just go a head and avoid him at all cost.

CC is your worse enemy with this build as it requires you to outspeed your enemies and gap close with your W + E. Morgana's spell shield blocks your Q's knock up and same applies with Sivir E, Nocturne W, Mundo Passive, and Malzahar Passive.

Lissandra is a great mid laner if you are playing Xin Zhao jungle as her E and W allow her to gap close and root the enemy respectively.

Lissandra is a great mid laner if you are playing Xin Zhao jungle as her E and W allow her to gap close and root the enemy respectively.

By Deathbat1
Mathematically Fortold Xin Zhao
Xin Zhao is a great jungler and even though I am quite new to the champ I think I have perfected the mathematics behind him. With the on and off spotlights of the bruiser mythics we have yet to see Trinity Force's big entrance and this build I think could change the popularity of Trinity Force giving it time in the spotlight along side Xin Zhao who got a lot of attention this season with new AP scaling on his passive, W, E, and Ult.
Runes: A breakdown
The runes are a key part of fighting with this champ as the runes I have chosen for this build give him insane attack speed, mana and health regen, movement speed, and damage.
Keystone: Lethal Tempo(Gives Attack speed against enemy champions)
Heroism: Presence of Mind(gives mana regen after enemy champion takedowns and while damaging and enemy, works well as Xin's abilities don't increase in mana cost)
Legend: Legend:Alacrity(gives a ton of attack speed based on Legend stacks), Legend:Bloodline(gives life steal based on Legend stacks, really good for survivability)
Combat: Coup de Grace(gives extra damage to enemy champions below 40% max health and is all around a good rune for that section), Last stand can also work.
Secondary Rune tree: Domination
Malice: Taste of blood(recommended as it gives sustainability to Xin Zhao against both enemy champs, jungle monsters, and creeps, or Cheap shot(true damage on Q)
Hunter: Relentless Hunter(recommended as it gives movement speed toward enemy champs allowing you to get close enough to gap close with W + E, or Ravenous Hunter for more sustainability.
Shards: +10% attack speed, +9 adaptive force, +6 armor or +8 MR

Item Breakdown
The items I have chosen for Xin Zhao maximize his attack speed stat while throwing in a little bit of On-hit bonus.
Trinity force is a great item but has been eclipsed by items like Goredrinker during the preseason, as well as Divine Sunderer and Stridebreaker more recently. Trinity Force gives 35 AD, 30% attack speed, 200Hp, and 20 abilty haste. It also has a unique passive which gives bonus bonus move speed and damage while attacking, it gives the On-hit spell blade proc, and 3AD, 3AH, and 3MS per legendary item.
Berserker Greeves is the best boots you can go as it gives attack speed, however you can build Merc treads as well.
Blade of the Ruined King: This is a great item as it gives Life steal and attack speed but also on-hit damage while attacking and if you attack 3 times(like PTA or electrocute or Akshan)
Guinsoo's Rageblade: A great item with this build as it gives insane attack speed and On-hit damage.
Essence Reaver: Gives Xin more mana sustain with his damage.
Death's Dance: A great item if you need armor. Also gives great sustain and true damage
Wit's End: A great On-hit Item that gives MR and Attack Speed
Ravenous Hydra: Allows Xin to clear camps and waves easier and gives him more healing
Axium Arc: Can be a good item because Xin's ult is really powerful
Serylda's Grudge: great item with the slow and armor pen
Kraken Slayer: Another on-hit item that works well with Xin's Q giving him more true damage capabilities. Try it with Death's Dance as well for more damage.
Update on rune info
To all the people who thought the old Lethal Tempo was bad on him, I think you might want to reconsider because after the rework it is amazing and better than before.