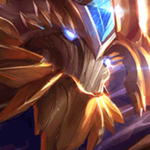 Ardent Censer
Finish targons Get 1 of these

Vanye - F*ck this bitch. Unless you got a lockdown might as well go zed support. (don't)

Ezreal - hurts early, but benefits you more if he is underfed; since he procs your passive more often, recently a bad adc right now in 7.17

Kalista - hypercarry which is the only way to kill her is to lock her down, not as bad as Vanye but with no lock down on Kalista she will take a lot of health from your team.

Ashe - Easy to go against, just do the regular combo and 1/3 of her health is gone. If she gets too fed, just co*kblock her ultimate. Make sure you don't W her ulti.

Caitlyn - Nerf pretty hard but recent PBE patches she be a tower destroyer. That might be the only problem you have to be against. The early game would be nerfed so you can engage on her easily. Just remember a good cait would trap you if you w on her. (Theory- get tower destroyer to counter her getting first tower)

Varus - Not enough experience, but i see him as a immobile Vanye.

Twitch - Don't get cheesed and you be fine. Vision and red ward guys! also, if the support seems off-ly aggressive, twitch is most likely with him.

Tristana - RI have not enough experience to say anything more than she will use Rocket jump after you w, as well as having jump when she kill an enemy champion and finshes her bomb. She also has increase range with her autos bomb and ultimate so watch out.

You slippery b*tch. Make sure you don't waste your Q while fighting her 6. Snares does'nt cancel her Ult. If your ADC has Hard CC, Remind him or her!

,
Don't take my build for granted. I'm in Gold 4 whose recently thought of this very theory-crafting one of my mains but, I only have main-ed Maokai since January.

The strongest reason I made this guide is to share and explore my Maokai support build.
so this build is still not the best it could be and still in development. And also to take credit of this build. (Hopefully some Korean guy pick it in LCS :o)

The play style of this build is to sit on your ADC and peel with your never ending q,w,e as well as heal on your passive while your ADC heals from your Ardent Sensor and stone-born.

Feel free to list some suggestions and/or CONSTRUCTIVE criticism for this build.
Also I based some of my stuff from this guy, he is a real help:

BTW this guide is updated every day, so make sure you check on it every so often.
So yea.. lets get started!

-PS Hello Pre-seasoners! This guide would leave you better than s7. You won't die AND peel!

Just remember this
and you will win
A lot of games.
I think.

Maokai support reborn takes a different approach to most maokai plays.
Instead of continuously tanking in the front line, you protect your ADC, just like a thresh would.

+ Insane Continuous peeling (Similar to Thresh play style)
+ Easy to pick up and play
+ Really tanky from items buffing passive
+ healing from laning phase is high
+ Ardent Censor = high item power spike
+ all abilities proc stone borne
+ Not item reliant, though it buffs him a-lot
+ A lot of health - heal synergy
+ Non-meta build,enemies can lack of knowledge of counter-play
+ High healing
+ Junglers who are auto-based such as Master Yi, Xin Zhao and kayle benefit during earlygame
+ EVERYONE can use your Ardent Censor, plus for hyper carry-auto based champions, it boost their DPS even more!

Negatives
- Not front-line tank, but hybrid support-tank.
- Jhin and Ezreal sucks with this build.
- Have to play passive/aggressive.
- Vanye hurts, Don't play against her, ban her.
- Change of play style to tank support Maokai, have to use stone-borne.
- doesn't give shields w/o items.
- Heavy poke lane hurts but you counter them late game./color]
- (IMPORTANT) Need at least a decent ADC skill level.
Unique Skills

BTW taking heal is an addition of activating ardent but exhaust can activate stone-borne.

The usage between your abilities and your stone-borne is important.

So this is what you do:
One of the main ways you can engage is to:
- Use Twisted Advance, wait out the root to almost complete: (unless you know they won't flash away)

- Walk away you are you pushing to: (this could mean moving away from your team to push the victim into them or to move towards your ADC to push them away from your ADC. (You don't have to move around to push her away. You can just aim where is she gonna go if she/he got w on.

- Which allows you to position Bramble Smash

- And E quickly to the position they would most likely be ( Since Sapling has both having a delay from being thrown and to chase victims.)

It point of the situation can vary (as you can extend stone-borne even longer, but this is your default combo.

You can either ult position where they cannot see the ultimate before it is too late (half way the channeling of the ult wave) Then doing the combo
Or adding ultimate after throwing Sapling toss.

Other skills to consider:
Bramble Smash can push away enemies really fast so make sure you don't push away skill-shots that are landed on your teammate. Instead, you should push towards your team mates skills shots. This is easy when pushing them to stationary skill shots like Anivia Ultimate or Trundle's E.
Items

Even though it is nerfed recently into flat attack speed and Drain, its still a 3300 gold worthy item.

- It fixes Maokai mana problems during lane and throughout the game.
- A bunch of AP which he scales on all of his abilities. (155% AP scaling excluding sapling ratio)
- 10% CDR to heal and peel more proc more stone-borne.
- 10% bonus healing and shielding activates on your passive to yourself, allies activating stone-borne, Face of the mountain shield, spoils of war, and shield battery. As well as Locket, and knight's vow; your potential core items.
-8% move speed adds to 1.5% move speed as well as tier 2 boots for a surprise factor on your to-be-fertilizer.

And for allies get Ardent Censor what ever Maokai gives stone-borne or shielding or redemption.
Ardent Censor can proc Runnans also.
Synergy

Maokai synergy is so good with these champions, you can't understand in till you try them:

Vanye - Your ultimate counter as well your supreme synergy. You work so well as you peel for her and she gets massive amounts of healing.

Ashe - she needs the peel, and she can set up for kills very easily.

Kog'maw - attn speed and Drain from Ardent Censer with his Runaan's should be illegal, but not as good as lulu though.

Bad synergy (you should avoid playing with on bot lane

Jhin - Don't play with him with this build. Even if he scales AD with attack speed the reduced auto attacks on his passive lacks average damage than a regular ADC.

Compared to other supports

Thresh has a infinite scaling on his passive which increases his armor and AP, Thresh at 45% CDR has a 6 second (4 if it hit a unit) CDR on hook which stuns for 2 seconds as well as a very useful w for an escape for team mates, a flay that cancel dashes and animations very easily and a box which slows for 99% for 2 seconds.

Compared to maokai, Maokai offers being tanky, Has q quicker and easier to peel of the support, 1 more hard crowd control, have an alternative ward and being more easier to play
but lucks the infinite scaling from thresh as well as a very useful escape on his Lantern, rewards for having a higher skill level.

Leona - Tanky, but Not tanky enough in late game.

Braum - Need tank and support items, and doesn't get healing from ardent's movement speed and AP is useless on him.

Taric - Works really well on him, might as well outclass in healing but his e, his only cc can be easily avoided.

Tahm Kench - Doesn't need damage for AP, but usually use stone-borne pact. Move speed and healing is good on him, but is single damage focused.

Try this build, maybe this will carry to your target rank. Who knows?
Other really good weird builds
-Wit's End Amumu with Nashor's socs and liaundry's + 20 magic pen + 6 from masteries = 81 total magic pen
-
Against other champions

Ezreal- hurts early, but benefits you more if he is underfed; since he procs your passive more often, recently a bad adc right now n 7.17
Update

7.22 looks like revitalize doesn't apply to yourself currently,but they are changing it next patch (7.23)