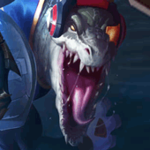 Runes: Most Damage for Target

Almost everyone can kill twitch at levels 1-5. Thus, your goal is to not die, and poke or kill enemies in lanes early. DON'T DIE.

Start of the Game

As soon as you can leave buy your Emberknife and Refill Pot. Place the yellow ward in the pixel bush you are not starting at. Then back and grab the Sweaper Ward. Go to your starting buff and get a leash.

After your first buff you should have saved smite to go crugs or gromp, use Smite on one of these camps. Then go straight to your other buff and clear it with smite. Go try for a gank at either bot or top depending on the side of the map you are on.

You don't win scuttle fights. Unless you can cheese one out with smite or an auto, its not worth your death. Go get the other or give up both scutts.

Your ultimate can outrange towers. Go for cheeky tower dives, and try to sneak a dragon with your team.

Guess what? You have now hit your full spike and probably have 2 items and boots. Its time to go in. You are an adc with incredible damage with Runaan's + ult. You should be able to pick up 2 - 3 kills per fight with Shieldbow keeping you safe.