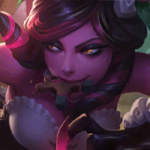 His gap closer is on the lower hand of the spectrum this is why I did not put him into extreme, overall champs with gap closers that do damage really quickly (before you can w & e them) are the best counter to Taliyah but with enough practice you can get a decent game against Viego if you have enough experience on her.

At the start of the game its a fine matchup but make sure she gets the least marks as possible (the dots on the map) as she can grow strong really quickly. Note: consider taking Zhonya's hourglass against her.

Vi has a really good close gapper if your opponent knows how to use it, so be aware of that. Zhonya's hourglass is useless with her armor shrreding so if you want to fight her keep your distances. Note: if she has her flash up do not even try 1v1.

Master Yi is a really bad matchup and you are 100% not going to have a good time against him.

Kayn is a fine matchup if you can out cs him by invading smartly and landing your E>W (or W>E if you do it fast enough) correctly.

Kha'Zix is a no no, his gap closer will be hell for you as he can just reach and one shot you really quickly, the only thing you could do to make this matchup more even is doing a good invade (in which you kill him and steal his buff) and than stay on top of him in cs for the whole game which would work if your team does not feed him at all.

By DarkWither
Introduction
Hi I do not have much to say really about myself other than I main the jungle role and overall I only started playing from season 10 but I have a long history of hating Taliyah and of how underpowered she is even do she has in my opinion the most interesting abilities in the game, with your help in the comments and the help of my friends I want to optimize her build because I am having a lot of good games with her (with my build) and I do not think her 0.2% playrate makes her justice, her playrate is mostly due to her unoptimized build in my opinion, so I want to help her get into at least the jungle tierlists since she is not even regarded by some as a jungler anymore :(
Invading
I always try to invade, no matter who I am against I will always have the upper hand with Taliyah's Q which has a really high damage and distance.

So what you want to do if you start at the left hand corner of the map is to wait in the top river bush (the one next to mid) and if anyone gets close just Q them and make sure they do not ward your bush, once you get close to the spawn of the buffs(30 seconds left or a bit less) go and Q the bush behind the red buff camp or anyone that is standing close to it, if you do not find anyone just Q the bush beside the camp and if there is no one there as well just get red and raptors, if you find anyone after 2 Q's you can basically get them really close to death, with the help of the mid/top laner you should be able to invade with no problem, I can even manage to 1v2 sometimes and get away with the buff and a double/single kill.

If you start on the top right corner you still go to the same bush and basically do the same thing as I explained before but instead of using your Q against bushes just go behind the enemy's blue camp and ward the bush right beside the buff through the wall to see if there is anyone there, and than start using your Q against your enemies once you see them, than get both the buff and the gromp if you can.