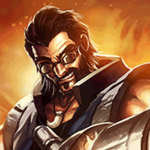 Guardian Angel
When you want to do a challenge

His skill can heal himself and dodge Talon R

Bring me out of here

Superman is coming to give you ARMOR

By Bothboom
Introduction
Hi, I'm Lol killer 007 and I have more than thousands Ranked Game on Talon. My Rank has now reset again and I am going to give you some tips for Talon Main.
Before you want to become Talon Main, Note that you will have to use combos. So watch this video first.
https://www.youtube.com/watch?v=ow-Tx7nBfwA

Flash - Always this, no need to ask.
Ignite - Use a combo and ignite... Free kill.
Abilities

I almost always start Long sword just for the damage . Whether you choose to run Refillable Potion or Health Potion is up to you. I recommend Refillable Potion in matchups where you would take easiar matchups such as Viktor.
Early Game Items

I always buy Tiamat as the first item because you can CS minions easily. If you don't have enough gold, buy long swords as much as you can because Talon's most of the items need the Long sword.
Usually I buy Serrated Dirk for the next one and follow by Caulfield's Warhammer.
Boot Options

If you are winning the lane and want to gank the other lanes, I recommend buying Youmuu's Ghostblade first, because this item gives you MS. If you think you can not one-shot enemies, you can buy Duskblade of Draktharr first. I run Black Cleaver because it gives Hp, CDR and Damage.
Late Game Items

Lv 1 - Lv 3
I usually start with Rake, but if I face the assassin like Akali, I will max Noxian Diplomacy first. At first, you just farm first until Lv 3. From Lv 3, you will play more engaging but make sure you put a ward in the bush. If an enemy ganks your lane, you can use Assasin Path escape.

After Lv 6
If you are winning the lane, you will have to gank another lane. If you are losing the lane, wait for your JUNGLE gank your lane and kill enemy mid.
Roaming

This depends on you, as long you have Assassin Path, it is easy to roaming and ganks other lanes.
Last thing

Thank you for reading my guide.
I hope this guide will help you to become a Talon main.
See you!
( I will do a Shen guide as soon as possible )

Talon Jungle | Oneshot from the shadows. Conquerer. [10.13]
By ZephonEU