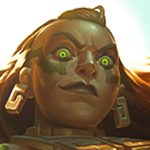 Illaoi Build Guide By ThatTaylorGuy Updated on May 8, 2020
Follow

Prophet of an Elder God (PASSIVE)

Tryndamere WILL do Tryndamere things to you. Pray...or ban. Probably ban.

Her mobility allows her to easily dodge our skillshots and her passive from her W shred through our big health pool faster than you might expect.

We can force Karma out of lane easily by freezing our towers and hitting our E's under tower. She can deal some damage so don't go too crazy, just focus on whittling down her health with E's near your tentacles.

Mobility is the name of the game! Irelia can dodge all of our skillshots with relative ease, has a ranged stun AND can disable our autos. Play safe, farm under tower and fish for E's.

!!!Season 10 update!!!
As of 3/3 Runes and items are updated. Working on recording footage with and without commentary for a video version of the guide!

I've picked Illaoi back up, the guide will be updated shortly. For now, everything that's rune specific or some items (I'm looking at you

Spear of Shojin) should be considered out of date. But I must emphasize that the vast majority of the guide is up to date. Just take

Conqueror and don't build items that don't exist in the game and you'll be fine...I promise! Would I lie to you?

Hello there! I'm ThatTaylorGuy and welcome to my Illaoi guide! Whether you're new to Illaoi or experienced and curious as to what she's capable of, you're in the right place.

I stream regularly on Youtube and make videos for the YouTubes so be sure to check those out if you'd like more of what I do!

Generally speaking I feel that

Illaois pros outweigh her cons pretty substantially. Most if not all cons can be minimized by playing smart and having your team help out. There will be times that you feel all the cons against bad match-ups, but usually they can be mitigated.

Ignite isn't awful and you could definitely run it if you're so inclined. It gives some early-game kill pressure but puts you in a not so great position when it comes to gank plays.

P: Prophet of an Elder God

Illaoi and the Vessels she creates spawn Tentacles on nearby impassible terrain. Tentacles swing at spirits, Vessels and victims of

Illaoi if they damage a champion."

Prophet of an Elder God periodically spawns tentacles on impassible terrain. Knowing how to fight around your tentacles is essential to playing

Tips, Tricks & Things to Remember
[*] You can ping the cooldown of your passive to your team by holding down either alt or shift and left clicking the icon on your skillbar. This can be used to let your jungler or bottom lane know when a gank can be timed well whether by teleport or jungle pressure.

"Increases the damage dealt by Tentacles. When activated,

Illaoi smashes down a Tentacle that deals physical damage."

Tentacle Smash is our main source of damage, poke and sustain. It has serious lane clear potential and substantial sustain potential when paired with a

Death's Dance. By the time you get your first completed item you'll be able to nearly 1 shot the wave if you aim

Illaoi leaps to her target, dealing physical damage and causing nearby Tentacles to also swing at the target."

Harsh Lesson is the lifeblood of

Illaoi's damage. If you can't use it properly you'll deal considerably less damage than you should be capable of. It changes your next auto-attack to a short leap, makes your tentacles slam on the target area and is an auto-attack reset. It's important. Super important. Also it procs

Kleptomancy. In 9.13 a minimum damage tag was added to the skill as well as making said bonus damage work against towers. If you're taking towers always make sure to cancel your autoattack animation with this, it increases your damage per second.

Illaoi rips the spirit from a foe's body, forcing it to stand before her. Spirits echo a percentage of the damage they take to the original target. If killed, or if the target gets too far from the spirit, the target will become a Vessel and begin spawning Tentacles."

Test of Spirit is a neat little ability that really lets you annoy your opponent. It's a skill shot so it takes a bit of practice to hit consistently, but once you get the hang of it you'll have fantastic harass potential. You can also proc

Kleptomancy by attacking the spirit.

Another nifty part of this skill is that if you kill the spirit or the player whose spirit was ripped out moves too far away from their spirit they're slowed and become a Vessel. Vessels spawn a tentacle near itself every 5 (4 at level 7, 3 at level 13) seconds that automatically attack the closest Vessel/spirit every 5 to 3 seconds (based on level). This means that if you land a

Test of Spirit and kill the spirit or the enemy runs away they'll spawn multiple tentacles along their path that they have to either kill or dodge. It's just another thing for them to worry about so you can focus on CSing or harassing your opponent.

Another thing to note with

Leap of Faith. Before going all-in on an opponent try to hit a

Test of Spirit beforehand then ult with both the enemy champion and the spirit it creates in range as it will net you an additional tentacle.

Illaoi smashes her idol into the ground, dealing physical damage to nearby enemies. A Tentacle spawns for each enemy champion hit."

Leap of Faith is an incredibly powerful ultimate. It allows us to punish anyone that doubts our damage output 1v1 as well as put out some insane damage in group fights if the enemy team doesn't deal with you. It also reduces the cooldown of

Harsh Lesson from 4 seconds to 2 seconds and reduces the attack speed of spawned tentacles by 50%.

Illaoi is largely dictated by your opponent(s) but there's a few things that regardless of matchup you should be doing.


Last Hitting: This is probably the most obvious thing to do. If you don't last hit the minions you don't get gold, it's as simple as that. The more you play

Illaoi the more you'll get used to her early game damage which will make it easier for you to gauge when to attack to finish off a minion.

Illaoi has fantastic early game punish in the form of

Test of Spirit. If your lane opponent is running up to last hit a minion lay a

Tentacle Smash over the minion. They'll have to either take damage to get the cs or back off and lose gold.

Test of Spirit is a bit more tricky to land simply because it's a skillshot that is blocked off by enemy minions, so you'll need an open lane to land it.

Illaois early game AoE clear you can also punish your opponent by clearing the wave quickly. This forces your opponent to back up toward their tower and wait for their next minion wave to tank damage for them. If your minions get shoved under the opposing tower your opponent may miss some last hits costing them gold. At that point you should consider backing and buying an item or two while the wave resets in the middle. Early game dominance is mostly wave management so I suggest you read some guides dedicated specifically to explaining the art.

The biggest issue with shoving into tower is that you open yourself up to a gank. If the jungler sees what you're doing and is in the area you'll likely be punished yourself. To combat this we have wards.


Warding: Early warding is a big deal, it can be the difference between seeing a gank coming from a mile away and getting first blood'ed.

There are more situational spots to ward but these are what I consider the most important during early game. The less you die the better off you'll be so avoid those ganks and get some vision down often!

Illaoi is a fantastic splitpusher and unless your team is grouped up to fight or take/contest baron/dragon you'll likely be doing this. Splitpushing forces the enemy team to deal with the mass of minions descending upon their towers. If they leave them be they can take a tower on their own and push themselves all the way into their base.

Team Fights: In team fights you'll likely be fishing for hits with

Test of Spirit and

Tentacle Smash for the most part. Until your team actually engages (hopefully your team has a champion that can initiate well like

Malphite) you should be cautious. The last thing you want to do is get caught by enemy CC and bursted down before the actual team fighting begins.

Once it's begun you'll want to try to hit someone with

Leap of Faith on both the spirit and anyone else in range. The more people you hit with

Leap of Faith the more tentacles you spawn and the more of a threat you are. From there you'll want to try to burst down any squishy targets that are close enough to hit with

Harsh Lesson, the latter will have a 2 second cooldown during the duration of

Leap of Faith so that will be your spam skill. If all goes well squishies will be decimated in a split second and you and your team can clean up and go take objectives.

This section is a work in progress so check back and chances are you'll see new entries. It takes a bit of time!

All in all I love

Illaoi. Her kit is incredibly intuitive and fun to make use of while still being challenging enough to get that good feeling when you land a slick combination on an unsuspecting opponent. I hope that you enjoyed my guide and that you learned a thing or two about