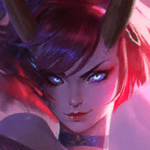 Evelynn Build Guide By Nyftt Updated on May 5, 2020
Follow

Aftershock VI with merc treads is the hardest matchup in the game in my opinion,. I generally dodge this matchup!

Rengar's R ability is a hard counter as it reveals your invisibility. As well as this his one shot potential makes it very hard for you. Against him make sure to keep your jungle entrances warded so he can't cheese kill your jungle. Against him opting for zhonya can be quite effective depending on the game.

Similar to Rengar can be difficult if the Kha'zix can track you properly. The match up is quite volatile though so if you are able to not get cheesed too hard you will definitely be able to scale nicely.

The definition of a fun time.

The definition of a fun time.

By Nyftt
Who am I?
My name is Nyftt and I currently hold 5 diamond accounts. I am a Diamond 1 jungler who mains

Kha'Zix mainly although I also play

Olaf and many other junglers.

I stream consistently at https://www.twitch.tv/nyftt_lol so you can come by anytime I'm on and I'm happy to help out. As well as this I also do a lot of coaching and would be able to coach anyone who is interested in further help.

This is a build that is underrated in my opinion. When you play against very heavy MR stacking on hp stacking champions and the backline is hard to reach you can go for this build.

Morellonomicon + a mix of the core items recommended (

This build will make you melt tanks (no joke).

Talon for example, getting an early

Seeker's Armguard can be very nice at reducing their damage by limiting the potential of their lethality items. When you can convert that into a

Zhonya's Hourglass as the active will be quite useful if they try to focus you down.

Rest of the build will be situational on their composition but work around the core items and how you see fit. Tank shredding if many tanks alongside those fed AD assassin's or simply going for the


Heavy AP or annoying stun which stops your engage (such as

Zhonya's Hourglass it gives you a nice amount of ability power and cooldown reduction as well as magic resist of course which can make you stay very relevant. This is actually why I never build

Abyssal Mask as although defensively it sounds ok, the fact that it gives you no AP for a 3000 cost makes it not favourable. Against high AP,

Banshee's Veil's is the way to go.


Should I always go

Yes. Although it's tempting to go

Ninja Tabi's vs. heavy aa damaged based comps or

Mercury's Treads vs high CC, it's just not worth due to how effective the early penetration Sorcerer's provides for

Most of the time I prefer to start at red into

Krugs into a full clear unless a gank opportunity shows on the map during the clear where I would stop clearing and go there. The reason behind this is that you want to rubberband your

Raptors as soon as you can as

Raptors is also quite good. I would deviate from this in matchups where your win condition is on the opposite side of your blue buff, in this scenario you would want to start blue and clear towards them in order to try to influence them.

Evelynn you want to sneak up from a nice angle when the enemies try to contest of take and objective or coming back from their base and one shot their carries. You want to get very proficient at using your

Demon Shade stealth and knowing where the

Control Wards are that way you don't give yourself away.

Evelynnis a great scaler, therefore even if the game is looking quite bad you can always opt for trying to delay the game and getting to your core items as a way to one shot squishy priority targets. With this in mind building

Rabadon's Deathcap will most of the time be a better option as it is cheaper and the item is very gold efficient when the active is being used and can help you win fights you maybe shouldn't have the damage to win without it.

Twitch
Vote Vote
10.9 Evelynn Guide
Who am I?
Items
What's the playstyle?