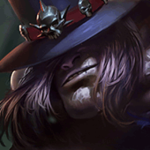 By Keith E. Sengula
Starters
To start your lane you can either build a Doran's Shield if against an annoying champion such as Teemo, in most other cases you can go for a Doran's Blade.
First Back
At your first back you shall decide whether you want to rush lethality (recommended when you are dominating lane) and go for a Youmuu's or if you want to build resistances; in most cases the Cinder is a good option, but if you want to get a better defense against a specific type of damage you can buy any item from the Chemtank recipe.
If you have some extra gold buy boots and a pink ward, you are going to push a lot with Aatrox's kit if you don't pay attention.
Core Items
This build is made for sticking to the carry in a fight and never let him go until he is dead, for that you are going to take the Chemtank, that allows you to stay alive very long in a fight, thanks to your E passive's omnivamp, but the most important part is the active ability: you can get to the fight and take down the enemy ADC extremely fast, and still be a threat to the enemy team after that.
Youmuu's has the same function, but instead of resistances it allows you to deal a crazy amount of damage to low armor enemies, and thanks to omnivamp that damage comes with massive healings.
Combinig Youmuu's active, your ult, and Chemtank's active and to the low cd on all those tools, granted by runes and the build, you can chase anybody, becoming their absolute nightmare.
In the end, we have death's dance, a great item when it comes to survivability and damage altogether.
Notice, this build is terrible if you are losing lane catastrophically, if you are already, go watch some other guide, this stuff ain't for you.

Adaptation Items Against AP
As introduced earlier the best item to build that has MR is Spirit Visage: it will buff your healings, and trust me, you like that.
If you need grievous wounds but prefer the damage to the armor you can go for Chempunk's Chainsaw (very situational, this item is worse than Thornmail most of the times).
If what you need is a CC removal go for Silvermere Down; this is great against Mordekaiser or Malzahar.
In some situation you also might want to take Force of Nature instead of some other armor item, just to finish off your build, but this is not very recommended as you should build this only if the enemy team is heavily AP too; if you just want another strong item, get yourself a Night's Edge: it provides good damage and a useful passive.

One Last Thing
Later in the game some item such as Youmuu's become less useful, so if you have some extra money, change it from another adaptation item, anyway, changing it with Night's Edge is always good.
Oh and we still didn't talk about boots, well go for the defense you need the most, if you need it (especially it's not worth to go for mercury boots if the enemy doesn't have many CCs, besides the magic damage) if you don't really need any bonus defense, and most importantly if you are dominating lane early, just go for Ionian Boots of Lucidity, they are always very very good.
Consider checking out my other builds,
until the next time,
Keith. (that's not my real name UwU)