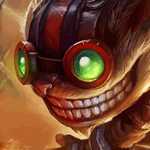 Sorcerer's Shoes
What to get then

My name is Jakob, i'm born in UK and raised in Denmark and i'm a semi professional League of Legends player.
I've been playing League of Legends for about 9 years, started back in Season 1 and got to high elo in season 5, peaking challenger for the first time in season 6, and been high diamond ever since
In season 6 i peaked Rank 37 on EUNE with 799 lp, and in S9 i have peaked 100 LP Diamond 2 EUW.
I've recently started playing in the Danish Competitive Scene, and now also started my twitch career for making content in Danish/English.

I do streaming on https://www.twitch.tv/erekkkkk where i try out new innovative builds, which i don't consider troll, but just very well set together in higher elo, going for grandmaster+ in season 10. (You should really come by and say hi, and be the first to try out the sleeperOP builds i create during the streams.)

Ziggs is a really fun and great champion to play, he's really strong in the mid game and scales good towards the late game, he has a lot of tower push and teamfight potential.

You dominate "almost" every 1v1 and can contain lane control in most games.
To start any lanes you have to think of 2 missions that will be your winning condition.

Option 1 They lack of waveclear
1. Push the Wave
2. Look for poke when enemy farm under tower.
3. Don't die to ganks


So in the Early game you should try to contain constant lane prior, and don't get killed, since you will get stronger by scaling, so a kill/gold lead in the early game wont apply much for how your mid/late game will turn out by that much. You rather wanna keep pressure and try to take down the enemies tower as fast as possible.


Go for a hard shove when enemy leaves lane or recalls for items and try to some damage on the enemy tower, since you hit hard with passiv on tower. Ziggs has a good amount of escape due to the slow from your

Hexplosive Minefield, and the disengage from your

When you get to the midgame / lategame you have different options on how to play. If you are really ahead and fed you should probably look for teamfights or picks and try to nuke targets, you could also play around your jungler and get picks with them, and then get objectvies done really quick.
High elo players are really good at micro play, so it takes a good fight to obtain an objective such as Herald, Drake or get towers, as they will rotate.

Ziggs has the ability

Satchel Charge and as we are maxing it second, it will come up to 35% of a towers hp, so a tower at 1750 and below, gets executed.

So to summarise, when a tower gets executed.

A lost matchup is just a champion who gonna win lane 90% of the time against you, since its a very simple matchup for them, and you don't really have much outplay potential.

A hard matchup is a list of following champions which has no problem in farming under tower, doing all in on you, and sustains really well.

These matchup is really winnable for Ziggs, but if you are not that familiar with the champion and the matchup it can easily go both champs way, as they have counterparts that can really put you out, and if they get a lead, you don't really have a chance of dealing with them later in the game.

Ziggs should win these matchups 70% of the time, since you outrange, outpush, and the champions listet below don't really have any counterparts against you as a long range mage.

Thanks a lot for reading my guide, hope you enjoyed it, and there was no reading mistakes or other misunderstandings.

Ziggs is not really a popular champion among pro players or any high elo players, hes really mechanical and require a lot of skill since most of his spells are skill shots.

If you are a real loller, or enjoyed the guide, don't forget to leave a like it would mean a lot to me, you can also come by my stream and say hi, and if you have any questions related to league i wouldn't mind answering them. ;)

Ziggs is a underrated champion for Soloq and competitive, he has great outplay and carry potential and is also really fun to play, i would recommend picking him up if you are aiming to become really good at understanding the game, and lane prior.