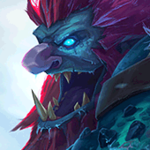 Retaliate with force after he misses his grab. Rush boots (of mobility). Consider taking E @lvl3 for dodging and escaping.

Retaliate with force after she misses her E. Rush boots (of mobility). Consider taking E @lvl3 for dodging and escaping.

Retaliate with force after he misses his Q. Rush boots (of mobility). Consider taking E @lvl3 for dodging and escaping.

This builds focus is to leverage one of the most powerful support items in the game:

Aria of Perseverance is pretty much the only champion which can consistently & easily apply the Ardent Censer buff to all her 4 allies and refresh it in under 6 seconds.

Each ally buffed by

Ardent Censer gets stats worth 1000g to 1750g, depending on level. That's huge value and not even accounting the on-hit healing. Teams where all 4 allies strongly benefit from the attack speed and on-hit are not uncommon (e.g.

Warwick jungle). In the dream scenario at level 18 your allies get a total of 7000g value, which is roughly worth 2 Trinity Force items.

Of course in practice the benefit will usually be much less, but still powerful enough to make a big difference. Together with

Windspeaker's Blessing you have a strong utility foundation. I'm currently platinum and employed this build on many occasions with high success.

There's one small problem: your

Aria of Perseverance has a prohibitive 100 mana cost at max level.

Tear of the Goddess. For a very modest 750g you get the awesome power of "manaless" Sona. To just name a few advantages that come with "manaless" Sona:

To illustrate how relatively little gold 750 is: Redemption's HP and Mana regen stats (which are both unneeded for this build) have a combined worth of 850g.

Soraka, because it pretty much offers limitless heals.

Tear of the Goddess on

Sona is similar in its endurance. Instead of raw direct healing, she delivers a combination of 7 combat buffs (speed, shield, healing, armor, MR, attack speed, two sources of on-hit damage).

For damage-oriented Sona builds I would not recommend Tear, because they don't need as much mana. Unfortunately DMG Sona has a hard time with tanks, because she usually can't get penetration soon enough. Furthermore she has to take risks for full Lich Bane effect.

With this utility build you stay farther back. So I see no reason to buy anything else than

Tear of the Goddess! That's after experimenting with many different builds over the past years. No other 750g investment would give comparable power and flexibility.

Nothing is set in stone here. Usually you want to have W maxed first though, because it is the core idea behind this

Ardent Censer build, so you want full strength on

Putting a few points into Q early is useful for stronger poke. Grabbing E earlier may be wise against a bot lane with high kill pressure.

Windspeaker's Blessing is essential; other masteries & runes are personal preference.

Since this build focuses on utility, I put no points in the Ferocity tree. I prefer

Runic Armor , because recovering HP is usually less of a problem (especially with plenty mana) than burst damage. Both are good though.

Fearless would help a bit against burst damage, but

Insight is just too good.

Seal of Scaling Health, because they break even with the flats at level 6 already, but it rarely makes a difference anyway. Level 2 all-ins aren't necessarily Sona's cup of tea.

Usually I finish the core build with

Seraph's Embrace before building for the 2 remaining slots. The extra 110+ AP will increase the power of all your abilities significantly, while also giving you a nice emergency shield. Notably

Song of Celerity will feel absolutely amazing for you and your team mates. And you can spam it :)

If the game isn't finished at this point I like to build a defensive item. The old Banshee's Veil would have been ideal, because it also offered health and MR (the two stats Sona lacks most, besides speed). New

Banshee's Veil is still good on her of course, if there are strong AP threats.

For this build I would not recommend

Redemption because the HP regen is virtually useless and also further mana regen isn't needed at this point.

Locket of the Iron Solari is gold inefficient (76%), so making good use of the active is key. On the other hand Locket's brother

There are many good build paths for Sona.

Tear of the Goddess builds have been around forever, but it is the addition of

Sona plays music, magic energy is her fountain and while the tears of the Goddess pour down she plays her tunes on and on and on...