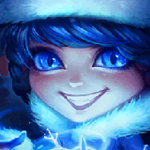 So, what is ARAM?

The acronym stands for All Random All Mid.
The main thing that here you are to play random champion and everyone plays in midlane, other lanes just don't exist. The map is different here and called

howling abyss which looks like a huge bridge somewhere in high cold mountains.

So, it all begins with choosing your champion.

What is a poke composition? That means your champions fight by hitting enemies with skillshot again and again, not using their auto-attack much. Many of them are quite squishy AP champions who can keep enough distance.

If you have many poke champions you excel early game. You strategy is to poke other team until they will be low on health. If they don't have similar composition they will probably sit under their tower (it's the safest thing they can do), so the only thing you need to be cautious is

Sonic Wave. Your team is most likely squishy and you don't want them to engage and kill you. Eventually they will be too low on health and you will have an opportunity to safely come closer and destroy the objective. For that you need to clear waves quite quickly so that enemies don't hide behind them.

Many champs that rely on their abilities are mana-hungry so your "poke and destroy" strategy is not going to be that straight. You will have to go back and get some mana from health relic or die to get items that prove you mana. So there will be times when you will have to defend, but in fact your strategy won't differ much: you play safe, try to low enemies' health from distance and then go.

Liandry's Anguish doesn't help you much. So if you have poke composition you want to end game as fast as you can.


By saying "dive composition" I mean having mostly tanks, fighters and assassins in your team. You have many melee champions that have to come close to do damage.

As I said, poke composition is stronger early game. So in the beginning you want to play safe, even if it means that you mostly chill under you tower and try to avoid their poke. I know some players find it boring and engage right away to have some action, but believe me that most times it means dying and nothing more.

You have to wait until you will have your ults. Then it will be much easier to dive, especially if you have at least one champ with CC. Than you will slowly get the whole control as it's you who decide when to fight. Great of you have "hook champion" like

Thresh cause you will be able to get some easy kills.
I've had these games when there were only melee champions against like 3 adcs. What can you do here? Wait until the moment when they will have no or almost no mana. Try to kill minions under your tower as fast as you can so enemies don't hide behind them, and then go straight there all together.

It's very important cause otherwise that one champion is likely to be just "eaten" by enemy damage. If you have tanks you will have some time to kill the team - and I mean the whole team, try to get as many kills as you can. If you have lots of assassins your goal is to kill all of them instantly. If you have mixed composition you want to protect your assassins and let them do their damage. A great example here is

Katarina and her R; let her do the work, just protect her.

After you kill them you need to rush and take objectives down. Closer to lategame it will be more and more easier, especially when your tank become too tanky for them to kill.

Of course it's not that often when you have purely poke or dive composition (yet it happens regularly, believe me!). Then you have to adapt to specifically to your set of champions, their synergies and combos. You can use both strategies.


Don't just run into the bushes in the beginning. Check if your teammates follow you. There's no point in starting a fight when only two or three of you have come, and you have the whole enemy team under your nose. In this case sit under your tower and wait until others.
In any case check the bushes, but again don't go there blindly! Certain champions ike

Ashe have abilities to give you vision, or you yourself may use

Mark/Dash if you have one.


You can read above what poke and dive teams can do. However there's one general tip: don't be afraid to ping. Please be respectful and don't do it like 10 times on a row, but one or two can really change the whole game because of a good communication.

If they ping, be ready. The fight will start soon.
And there's one more reason why you should ping. You team might just be a bit too late to follow you, and it will ruin everything. And it might sound obvious, yet still there are lots of players who do this simply because they don't ping: they go 1 vs 5 or 1 vs 4... And die.

And please, apart from that when your teammates are dead or far away don't just go alone 1 v 3, 1 v 4 or even 5! Rarely that may work, for example

Evelynn has her R and enemies are low on health, but be careful and don't let your greed take over you. Usually it's not worth it.

Also don't push too hard when you feel like your team is ready to fight but enemies hide under their tower. Go back and let them follow you, then you can fight.


If you are here to win, get objectives, not kills. If you play to get penta, that's okay to jump over your head only to kill everyone, but in other cases remember that taking down a tower or inhibitor bring you closer to victory. It's more forward-thinking that having a pleasure of killing that irritating b... enemy now.

It's sometimes worth to die but to take down an objective, especially inhibitor which brings super-minions to life, it's a great way to keep them busy. The best moment for this is when you have lots of money and want to get new items.

A cool move you can perform here is hiding in bushes with the whole team. For this you need enemies still to be away so that they don't know that you're preparing a huge trap. Hide and let enemies come close, than start a fight. Works amazing if you have a champion with a hook (

Pyke). Even if you're quite low in health, the surprise might be a decisive thing.

The relics closest to the middle spawn at 1:45 and the relics closer to the fountain spawns at 2:30. All relics respawn every 90 seconds after being taken.
Please, please, please ping before you will pick a healing relic! Your teammates might need it badly, and it's always very annoying when they don't because somebody did behind their backs. Moreover, because of that you will probably lose next teamifight as your teammates simply didn't have enough health to survive.

It's nice to ping before you heal your teammates. Mostly it's about

Redemption. However, you may not ping if you use it in the middle of a fight, that's fine, you simply don't have time for pinging.


You should take relic even when you're fine when enemy team is low on health. Steal their opportunity to heal!

There is not much time and capacity for that. There is only one wave of minions for everyone. And the drastic difference betweeen ARAM and SR is that you don't really need to worry about you CS. You will get some gold anyway (remember that nearby enemy minions killed by any ally other than you grant 6 Gold). You only need to focus on killing and/or last hit them if:
Place traps around relics to dissuade the enemy team from getting it. Also a good idea is to place them in bushes for the same reason.

Leaving the enemy low is sometimes better than killing them. If they do not die, the next fight will be like a 4v5 as it will be too dangerous for that one champ to engage. You can also leave him/her if he/she is far ahead, in that case you don't let them to die, buy items and become even stronger.

Ping if you're waiting to buy items. Staying near the fountain for a while seems like you went afk, let your teammates know that you're still with them.
Items & summoner's spells

As for runes, I usually check them here on Mobafire while champion selection.
Except for a few situations, what works well in SR is also good here. The only thing I don't like is

Inspiration, most of the runes will become useless lategame. Consider choosing

Domination depending on your champ.
Why I don't like


However, there are two

Inspiration runes that are fine:

The spell you won't find in SR is

Mark/Dash. It's great for anyone who engages and any melee champion, especially assassins. I also take it for champs like

Quinn to get close and do damage.
Sometimes I see people choosing this spell playing adc, but I won't recommend it: you may use it to get vision, but there are other champs who can do that, and you won't probably recast the spell.

Ignite are much more useful.

Another unique ARAM spell is

Clarity. Great for mana hungry champions, and a must-have for

Yuumi. It's nice if one player in your team takes this spell since you won't regenerate when going back to base.

Teleport is removed here; however, the animation will still play, so you can show others how cool it is :)

Last but not least: summoner spells have 40% CD in ARAM!


There is only one tip for the beginning:
I often take

Rejuvenation Bead even when I know that I won't upgrade it later. You need it to survive longer early game so ideally you die when you already have money for you mythic item. I will probably not take it playing supports, but definetely do if I am going to dive in the middle of a fight.
Meet Poro The Hungry (and other fun facts)