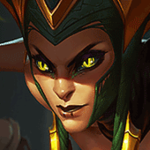 The Party Pony is a Problem Pony. He can clear as fast or faster than you, maintain early pressure, and control the tempo of the early game from his movespeed alone. Look for counterganks and look to pick up a dark seal stack or two before you try and fight him. His Ult makes him unstoppable, and a good Hecarim will save that for when you try to ult and kill him during dragon fights, making you waste your ult.

Skill Matchup Here - Lillia is extremely hard to land any abilities on, so when you want to force fights, it may be wise to chilling smite her and take sorcery as a secondary tree to stay on top of her. You will proc your passive off of auto-attacks more often than abilities when death realming her.

Mordekaiser does not like it when ranged champions try and kite him. However, this matchup is mainly dictated by how you play kindred's minigame. Buy your pink wards and place them deep if you can. Hell, even take stealth wards to track kindred. If you know where she is, then you can predict whether or not she will go for a mark. You can set traps by marks when you have your ult available. Lastly, if you can force her ult in a teamfight before using your own, you can select any person standing in there like an idiot to go to the death realm and die. This matchup is very much dictated by how the early game goes, and if you can get strong enough to ensure that Kindred does not exist as a champion for the whole game.

Christ, this matchup is a pain. The problem with Vi is that you cannot fight her early because her clear is unnecessarily healthy and her early damage is higher than yours. The next problem is that Vi goes unstoppable during her ultimate, meaning that when she dives your backline, you have to wait for her to exit her ult and CC your ADC before ulting her to punish her for diving. You definitely outscale here, but It is really hard to get to that point where you are stronger than vi. Take whatever dark seal stacks you get and run with them and the tempo you can get from an early kill from a gank.

Pantheon is a wonderful laner to gank for. Ping you are heading mid or top, and any seasoned pantheon above 50% health with enough mana will immediately jump on your target and full combo them for huge damage

Pantheon is a wonderful laner to gank for. Ping you are heading mid or top, and any seasoned pantheon above 50% health with enough mana will immediately jump on your target and full combo them for huge damage

By Ezio_Auditor
Work in progress Disclaimer
So this guide is going to be something I update over time. I am currently using this pick to climb out of silver and I am finding the champion extremely reliable. Do not take anything I say as the be-all, end-all law. Also, this guide is going to be expanded to an actual guide much later on as I actually produce and track results. For now, I will just post bit by bit and try to add more as I have time to do so.
Pro's and Con's of Morde Jungle
Pros
- Farms Fast
- Passive will melt just about anybody standing next to you
- You have level scaling with your base damage, allowing for extended camp sequencing
- Can deal lots of damage
- Gets quite tanky and heals a lot
- Any objective fight post level 6 is basically a free ultimate
- A good ult can always bring you back into a game


Cons
- First Clear isn't bad but is not anything to brag about
- First skirmish can be weak without items
- Taking Krugs is miserable (passive only works on big krug... yes this is very sad to me)
- Can be easily kited
- Somewhat hard to gank pre level 6
- Does not have much peel for carries outside of Ult

Why do you play Morde Jungle?
If I were to summarize the benefit to playing Mordekaiser in the jungle in one word, it would be agency. Mordekaiser is a strong champion when he has the opportunity to roam around the map and use whatever lead he has to pull his team with him. While his ultimate may seem like a strong split-pushing ability, it excels even more in teamfights when taking a high priority target to the

Truly, Mordekaiser is able to have a strong late game thanks to the utility of his ultimate during objective fights, his strong level scaling in his kit in addition to the scaling on his abilities in general, and his ability to force fights to either make a comeback or extend a lead until you pull ahead.
The Early Game

The First Clear and Jungle Tracking

Big thing to note: YOU MUST TRACK THE ENEMY JUNGLER FOR THE FIRST 10-15 MINUTES

I do not want to tell you a catch-all first clear because you should not be trying to play an off-meta jungler without the ability to adapt your plans to fit what you need. You should also have a decent idea of how healthy and fast the enemy Jungler's first clear should be in order to gauge if you would win in a skirmish against them. You should also consider which lanes you should have priority in, etc.

Needless to say, the first clear is definitely healthy and efficient, and as a silver jungler, I am able to do a consistent 5 camps (skipping Krugs) from either side and getting to the scuttle crab about 8-10 seconds before it spawns. I have noticed that starting on the blue buff definitely results in a healthier clear, as having your W

Indestructible and your E

Death's Grasp for Raptors is much better than just having a shield. However, Red Buff into Raptors into your Blue-side Jungle also is a strong clear.

A Few Tips For Clearing and Ability Use

1.) Start Gromp with your passive while finishing Blue Buff: you can use the AOE of

Darkness Rise to Aggro both camps at once. Do this once blue buff is at about 350ish HP in the first clear, as that seems to be the amount that works best for me in maintaining a healthy first clear. You can even line up a Q

Obliterate on both camps to get some efficient damage.

Indestructible: Because your shield can be consumed to heal you for 40% of whatever you consume, you must take into account where and when to use it. I always tend to use my shield when the bar appears to be around 60-80% full in my clear, as having one extra use of the shield is always better than using a full shield each time, but using it one less time during the clear. Also, always keep your shield active and let it decay unless you finish a camp and have some left.

Indestructible. I usually do this once or twice during my clear if both abilities are off CD. I find it is best used against Wolves or Raptors.

4.) Kite to the next camp and keep the passive going!!! - Your passive

Darkness Rise gives you constant damage and movement speed! This is huge for getting a fast clear through the jungle. This is CRITICAL for an optimal clear. You can use your passive speed to move to the next camp and start it. Make sure to Q

Obliterate over walls to keep it going by hitting a large monster. On AOE camps, alternate your Auto-attacks between small monsters and the large monster, making sure to auto the large monster on every other attack (This is why we take attack speed on our runes).

5.) Plan your smites and never finish your camps with smite - Always plan your smites for your first clear. Planning your smite also means planning your potion use. You should never use a potion when clearing a camp you intend to smite, as the potion healing will mean you receive less missing health healing on smite. However, never plan to finish a camp with smite. The reason why is that if you do, you will never receive the full value of the true damage on smite if you smite a camp that has less HP than your smite damage. If you smite a 300 HP Gromp at level 2, you will deal 410 true damage to it (an excess of 110 damage that could have been used to clear the camp faster). This excess damage is a net loss on clear speed for you to gain a little bit more health from your smite. It is not worth it. Smite also charges your W

Indestructible which allows you to have a larger shield for the next camp thanks to the damage smite does. Needless to say, it probably would take you an extra second to 1.5 seconds to deal that 110 damage you could have done with smite. Just trust me and smite your camps when they are closer to like 40% health or so. Get your full smite value.
Now, if you want to know where I generally smite, I tend to plan them based on which buff I started, as well as my matchup. Here are my general notes:

- In games that I worry about winning the scuttle duel or want to gank early, I will smite twice during my first clear before I reach the River. If I am not planning to fight early, or am not nervous about getting invaded or someone trying to fight me, I will instead smite once before reaching the river and save a smite for the crab.

- If I start on Red buff, I usually will either smite or use a potion for raptors, but NEVER BOTH. If I used a potion on raptors, I will smite my blue buff and Gromp, or only blue buff. If I smited Raptors, I will save my smite for Gromp.

- If I start on Blue Buff, I will smite my Gromp right after the blue buff when it is around 40% HP or so for the sake of a faster clear. I then will smite my Red buff if I intend to use smite twice before crab or not smite anything else if I want to smite the crab.