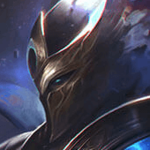 Runes: THE ONLY RUNES YOU WILL EVER NEED IN THIS BUILD, DO NOT TEST ME

This bad boi will run you down and fear you and make you sad. He's just super strong and has the ability to run away from you and engage out of no where, even without a team.

A good Kindred is able to ruin your early game pretty easily. Invading you and potentially killing you is the worst possible option.

Eve's high damage and fast clear at low levels makes your life painful. If you aren't in low elo most likely your best ban.

A good Kayn will bully you, a bad Kayn will die to you level 3. Annoying but not awful.

I don't know exactly what to classify him at, because whenever I play jungle I ban him to prevent my team inevitably inting into him. Personally annoying, but beyond that Idk man.

This man will save your life and give you head pats at the same time, no better man than Braum.

Volibear and Neeko have a great synergy in running down enemies with their combined CC. Big tomato plus strong tomato, what could go wrong?

This man will save your life and give you head pats at the same time, no better man than Braum.

Volibear and Neeko have a great synergy in running down enemies with their combined CC. Big tomato plus strong tomato, what could go wrong?

By Shattered770
What and Who is Neeko?
Neeko: The Curious Chameleon is a burst style mage with a stupid amount of CC on low cooldown, and y'all thought Morgana's q was broken. Neeko can transform into her teammates to throw her enemies for a loop and then hit them where it hurts. Normally Neeko is played in the mid lane role, however when she was first released she was designed to play in the jungle as well, which worked for like a week until they realized that she was too broke. Now I'm trying to bring back a meta level of Neeko game play in the jungle, or at least something that will shake up team comps and help keep that AD and AP balance.
How to Neeko
In this build your goal is to exploit Neeko's W passive which is just extra AP damage on her auto. Normally you build AP to explode your enemies but I prefer the more enjoyable pop from her auto, just gives her that nice "I'm not broken but your gonna die to me anyway vibe." Plus by not doing a billion damage you can let your laners get the kills so that they stay ahead as even though your items cost a lot of money you don't need more than the core to actually play well.
Camp Priority
Depends on your play style so I'll describe both buff starts (or in other words which side you started on). For both buffs you will need a leash and the following camps will make you low, HOWEVER Neeko can deal with low hp if played right.

For Red Buff start: Go Red, then Raptors, then Gromp, then Blue. Beyond this it doesn't matter.

For Blue Buff start: Go Blue, then Gromp, then Wolves, then Raptors/Red. Beyond this it doesn't matter.

Neeko has insane clear after early game (or when she gets her Skirmisher's without gem) so looking to steal camps is a must, Neeko falls behind quickly so you might as well bully as hard as possible so that it never happens.

Ganks
Ganking is a little wonk on Neeko, but is super good and can happen all the time. Her CC is strong and on low cooldown, you should always be able to engage or gank on this champ. Ganking follows the normal rules like going in when your team is shoved under, when the enemies are low, or if you are super cheeky a tower dive. The difference with Neeko ganks is that you don't have a dash or super fast way into lane without flash. To get into lane fast I normally use my W active first as that gives speed boost, shoots a clone to confuse the enemy where I am, and allows me a brief second to choose a target. After your W follow up with an Ult or an E for CC and engage.
Final Thoughts
Neeko Jungle is actually broken. Since I started theory crafting this build I have won 7/10 games. It's super fun to play with a group of friends and absolutely smash the enemy team. This build seems weak in the early but turns the tides quickly as you farm faster than everyone, scale out of control, and win every team fight.

I hope you enjoy this guide and play the strongest tomato around.
AND YOU BETTER NOT STEAL HER FROM ME!!!!!!!!!

Shattered770 Neeko Guide
Vote Vote
Neeko Jungle: The best decision!
What and Who is Neeko?
How to Neeko
Camp Priority
Ganks
Final Thoughts